Onsen And Coronavirus; A Wonderful Meeting Under Horrible Circumstances 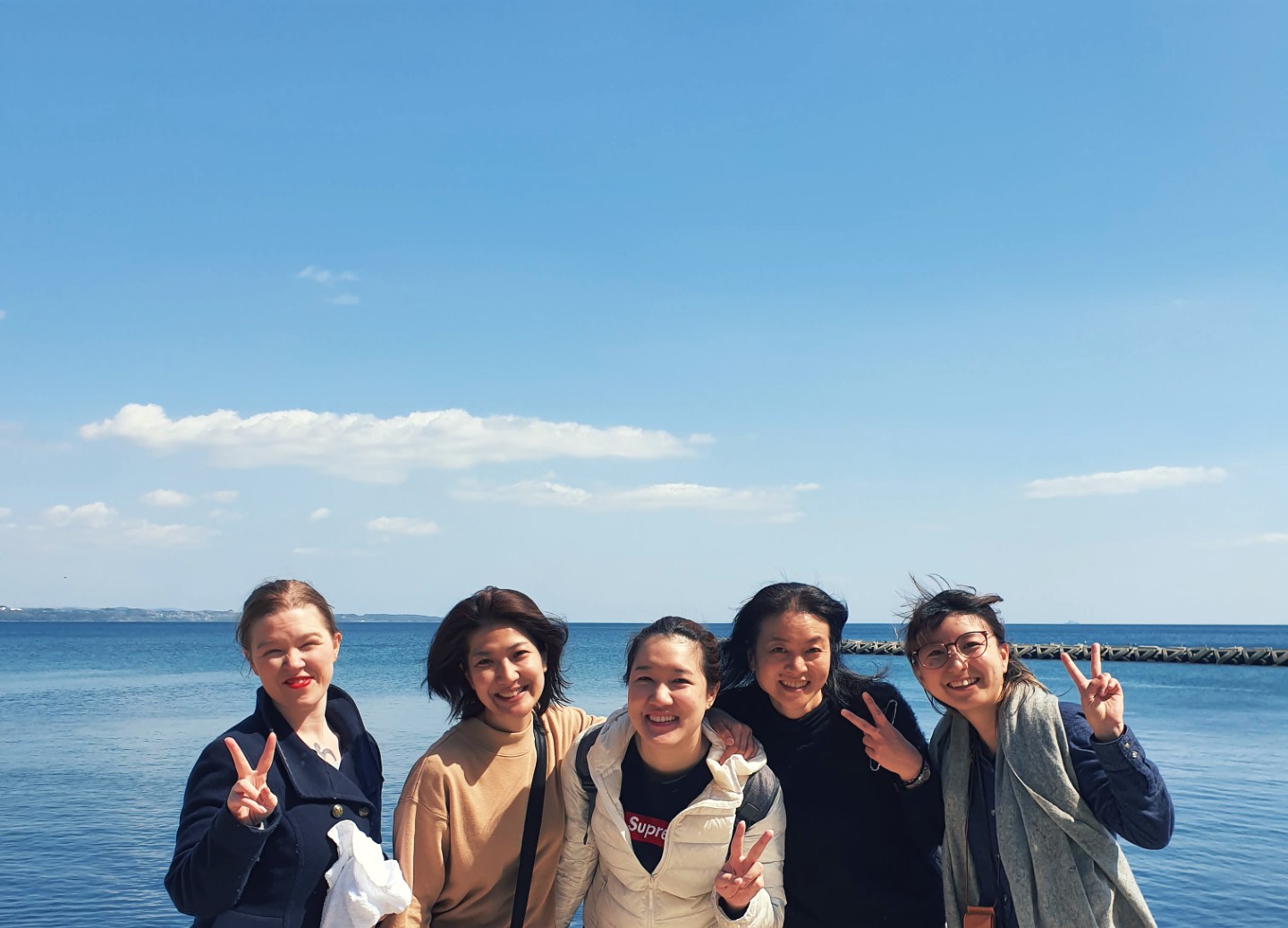 How to Enjoy Beppu Vol.15 – From Singapore

In the wake of the coronavirus outbreak, the tourism industry has taken a massive hit to say the least. In particular, Japan, in preparation for what was supposed to be the 2020 Olympics, was expecting a record year for foreign visitors. The outbreak has seen an end to this hope.

Perhaps, nowhere is this absence of travelers more felt than at Japan’s tourist information centers, which are usually bustling with many Asian visitors this time of year. However, there are some travelers who find themselves stranded in foreign lands during this crisis. We at Wander Compass Beppu have had the fortune to be able to welcome some of these rare travelers.

She was stuck because of coronavirus in Korea

During the early weeks of the outbreak, there was one such guest: Valerie, a strong-willed solo traveler, stopping by from Korea. Originally from Singapore, she quit her job as a banker to travel all over Korea and is currently studying the language there. When asked what made her choose Korea, she said wanted to experience the winter season there, abundant with pleasures that are not possible in her native Singapore.

Prior to this visit, Valerie had been to Japan once before. Her journey consisted mostly of major cities like Tokyo, Osaka and Kyoto. This time, however, she decided to explore Kyushu. Originally, she was planning to return earlier, but due to the state of Korea’s coronavirus outbreak at the time, she decided to extend her stay in Japan. Based in Hakata, she was taking various day trips to tourist hot spots, and we were lucky enough that she decided to stop in Beppu.

It was only through luck, however, that we were able to make Valerie’s acquaintance. Her very first visit to Beppu was brief. She heard about the Hell Tour, or “Jigoku Meguri,” and was very curious about the sand bath, but by the time she arrived, these attractions were closed for the day. After this short visit, she returned to Fukuoka, where a chance meeting at Hakata Station led to her second visit. There, a friendly tourist information staff member, Masumi, told her about the local guided tours we provide in Beppu. Her interest piqued by the promise of hanging out with locals, and with most of Beppu left unexplored, she decided to return once more.

Only this time, she would have the company of a few new friends. 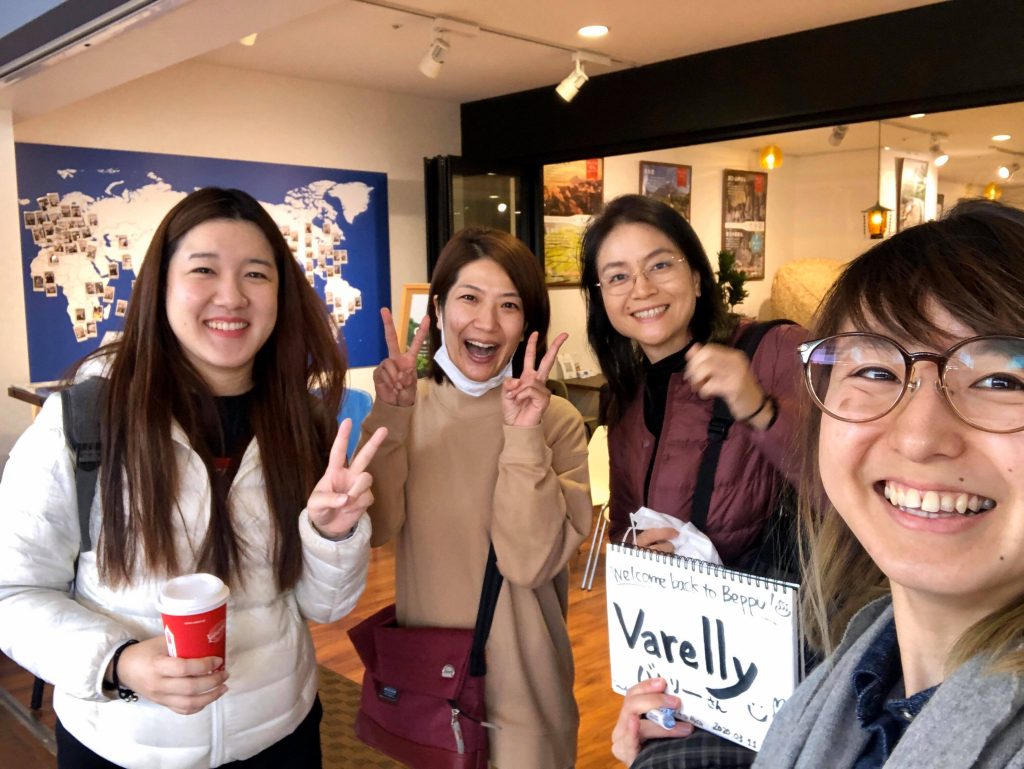 The rendezvous point was Wander Compass Beppu, where us guides would await Valerie’s arrival from Fukuoka. (We are Timo and Alyssa, living in Beppu, and Arisa and Masumi, the friendly staff from Hakata.) Valerie strutted into the travelers’ hub with a coffee and bread in either hand, not realizing the scope of the adventure she would be embarking on that day. 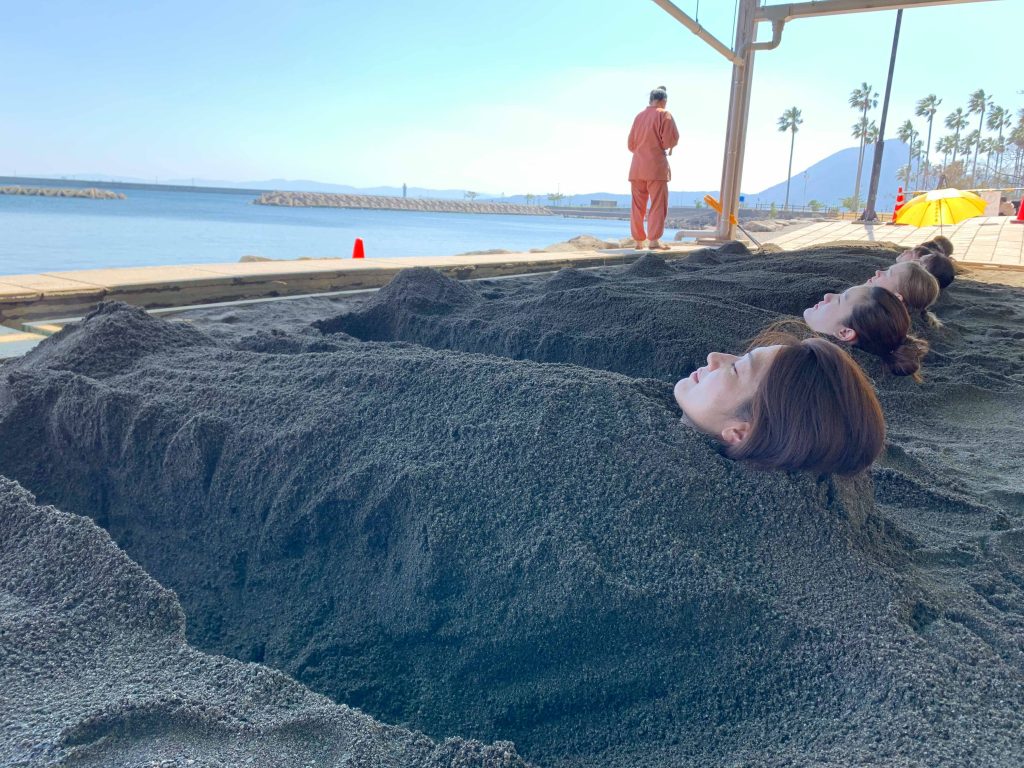 The first stop was the guest’s most anticipated: Kaihin Sunayu, or Kaihin Sand Bath. It was her first time to try this unique type of hot spring. Luckily for us, it was a beautiful day with a clear sky and the sun beaming.

In another stroke of luck, there was no wait at this frequently packed onsen. We changed into yukata and headed out toward the sand bath, which overlooks Beppu Bay. Valerie and Alyssa in particular were eager to wear this traditional Japanese garment. Valerie made sure to have one of us snap some pictures while robed. 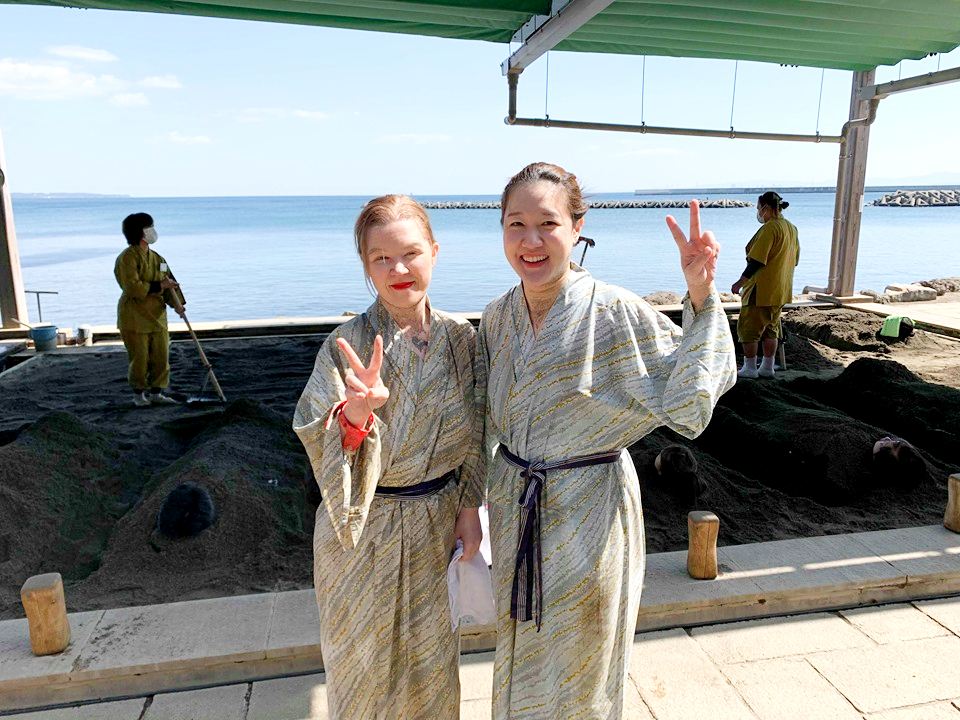 The sand bath was separated into two sections, one of which was submerged with water. Valerie found how they create this sand bath a great point of interest. Us guides explained that they submerge one section of the sand with hot spring water, heating it to a degree most pleasant for bathing. Once heated, half of the sand is ready for the bathers and it is time to heat other half.

We were told to lay down in our designated section and once prone, the staff began shoveling the warm sand over us, burying our bodies up to the neck. The sand weighed down our bodies. Valerie likened the pleasant pressure to a massage. Our heads tilted up and facing the bay, we gazed out at the peaceful ocean. “I could stay here all day!” Valerie said. The sound of ocean waves was music to her ears.

After our 15 minutes were up, we brushed the loads of sand off ourselves and headed inside the facility. We washed off before taking a short dip into the normal onsen here. This was where Timo explained the process of how onsen waters form. “The waters we are bathing in now are 50 years old. This was rainwater that was soaked up into the earth and heated by magma. Now it emerges from the source as onsen!”

The sand bath would turn out to be the highlight of Valerie’s Beppu experience. “I liked it more than the regular onsen!” she declared. 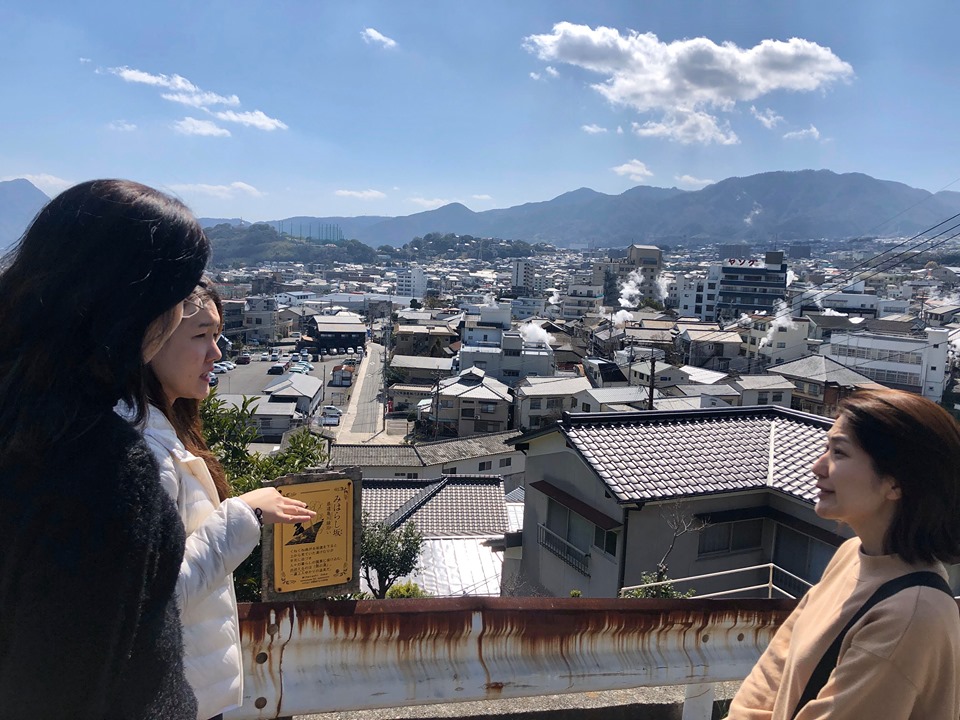 Next was the Kannawa steam view. This is a view unique to Beppu because of its abundance of onsen. Looking out over the steams filling the city scape, Valerie had many questions. At first, she didn’t realize the steam was a result of hot springs. We, the kind guides that we are, explained there are over 2000 onsen sources in Beppu and from them the steam emerges. She questioned whether these were natural or manmade. We were happy to say that Beppu has the greatest amount of natural spring sources in all of Japan!

From there, we journeyed onward to Kifune Castle. We told Valerie that there was a great view from there as well in which all of Beppu is visible. What we didn’t tell her, however, was that there was a certain creature waiting for her there. 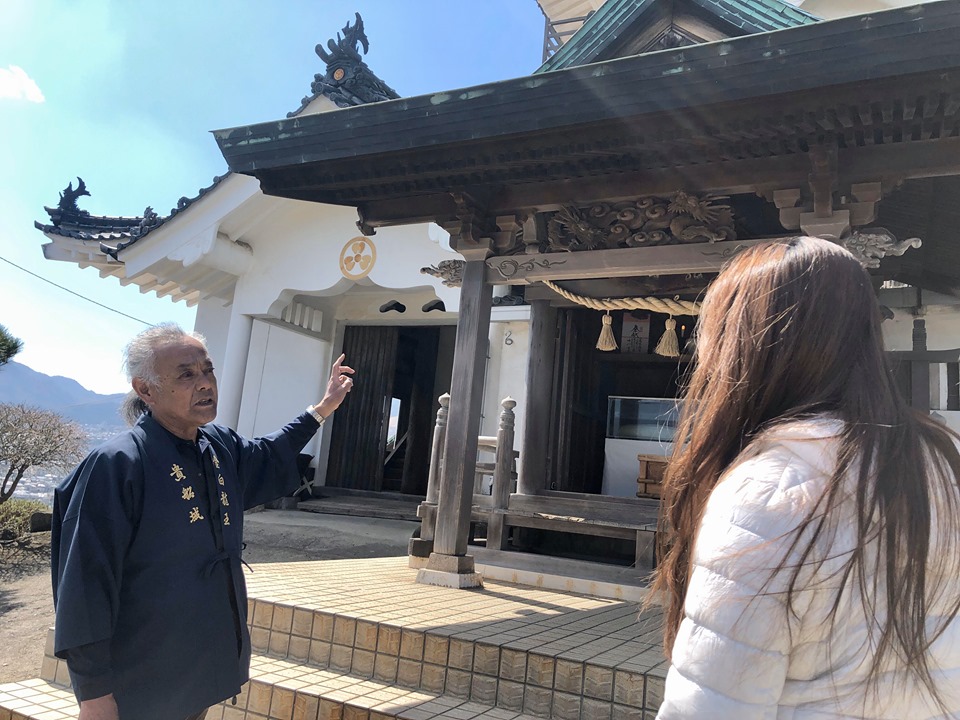 Once we arrived, the owner, Saru Watari, kindly explained the castle’s history in English before he introduced its resident guardian. Inside the castle doors, a white snake sat in a cage. This guardian bestows prosperity unto those who touch it. At first, Valerie was frightened by the sight of the deity, but after learning its significance to the castle and local culture, she understood. 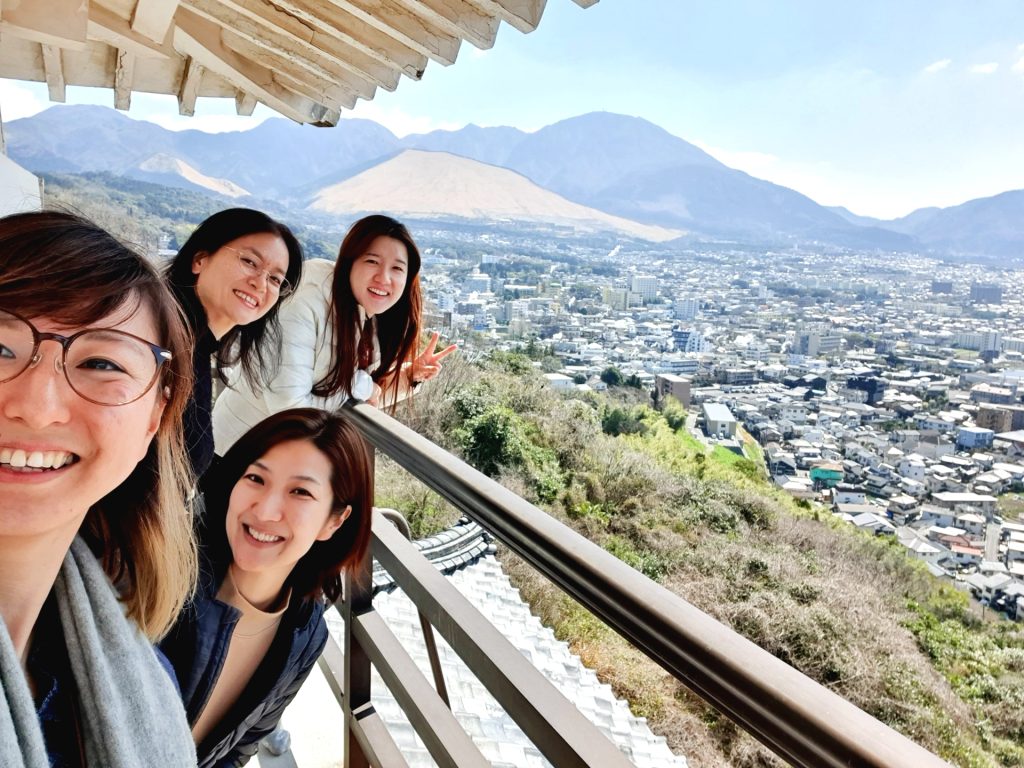 Once at the top of the castle, which is situated on a hill, they took in the lovely view. Valerie spotted Mt. Takasaki in the distance. Timo explained that you can visit the monkeys that inhabit that mountain. It was then and there that Valerie decided she would bring along her parents to visit Beppu next time. Though as the coronavirus crisis goes on, that day would seem a long way off.

To be continued in Part 2!

Beppu Kaihin Sunayu
*Due to the current coronavirus outbreak, this facility is closed until further notice.
OPEN：From March to November 8：30～18：00 （reception until 17：00）
From December to February 9：00～17：00 （reception until 16：00）
※Depending on congestion, the last reception may be moved to an earlier time.
※Please note sand bathers may need to wait to use the facilities depending on congestion and bath preparation. We ask for your understanding. (Maximum 12 people at one time)
CLOSED: the 4th Wednesday of every month (in case of a national holiday, the following day will be closed)
FEE：1,050YEN
TATOO： ALLOWED

How to get to Beppu, where Sunayu is located