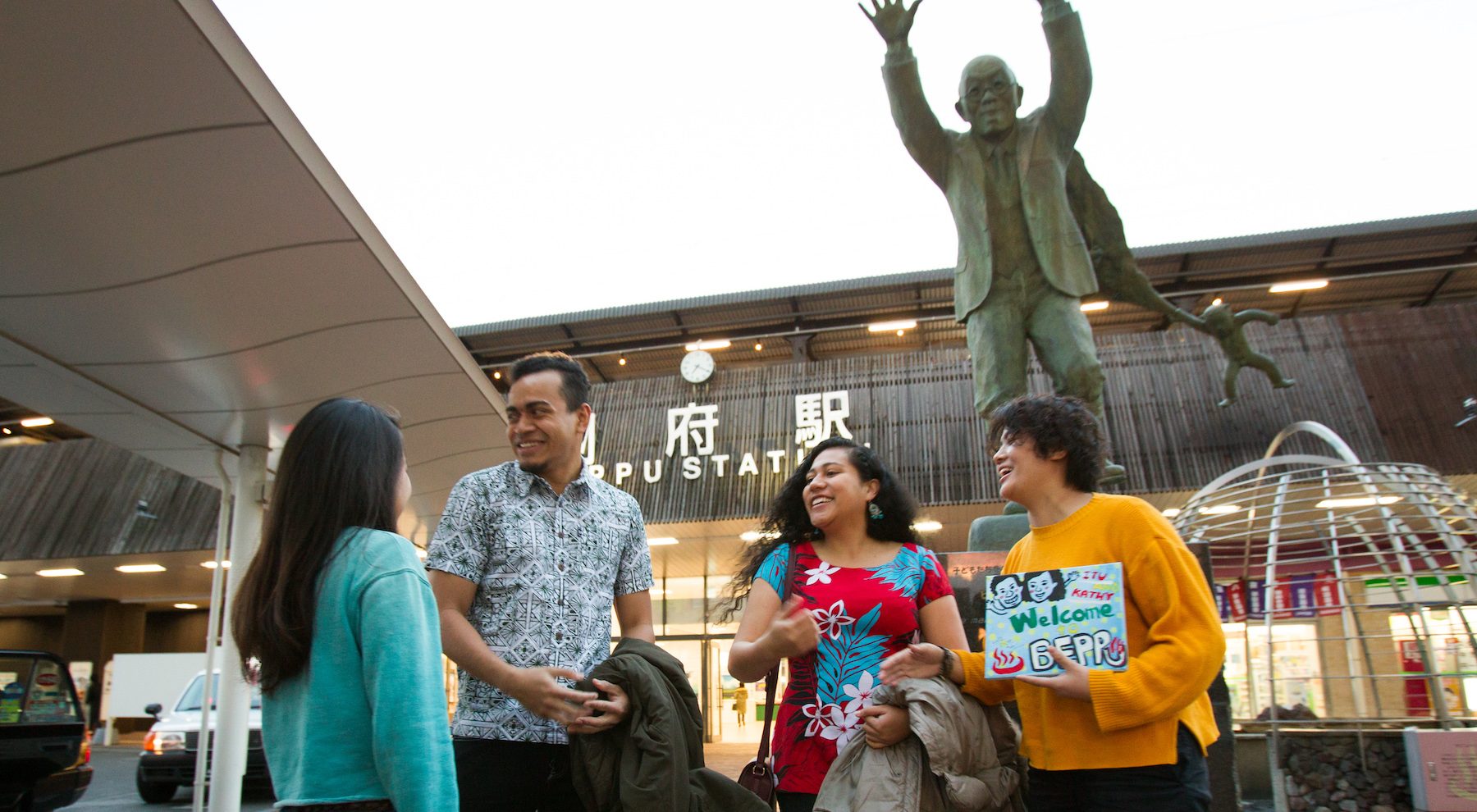 I’m sure everyone here has seen this statue in front of Beppu Station. Tourists who pass by love to take photos with him! However, in reality, not many people actually know who this statue is of. It is in fact, Aburaya Kumahachi, the father of Beppu tourism.

Let’s learn more about the mysterious bronze statue in front of Beppu Eki. 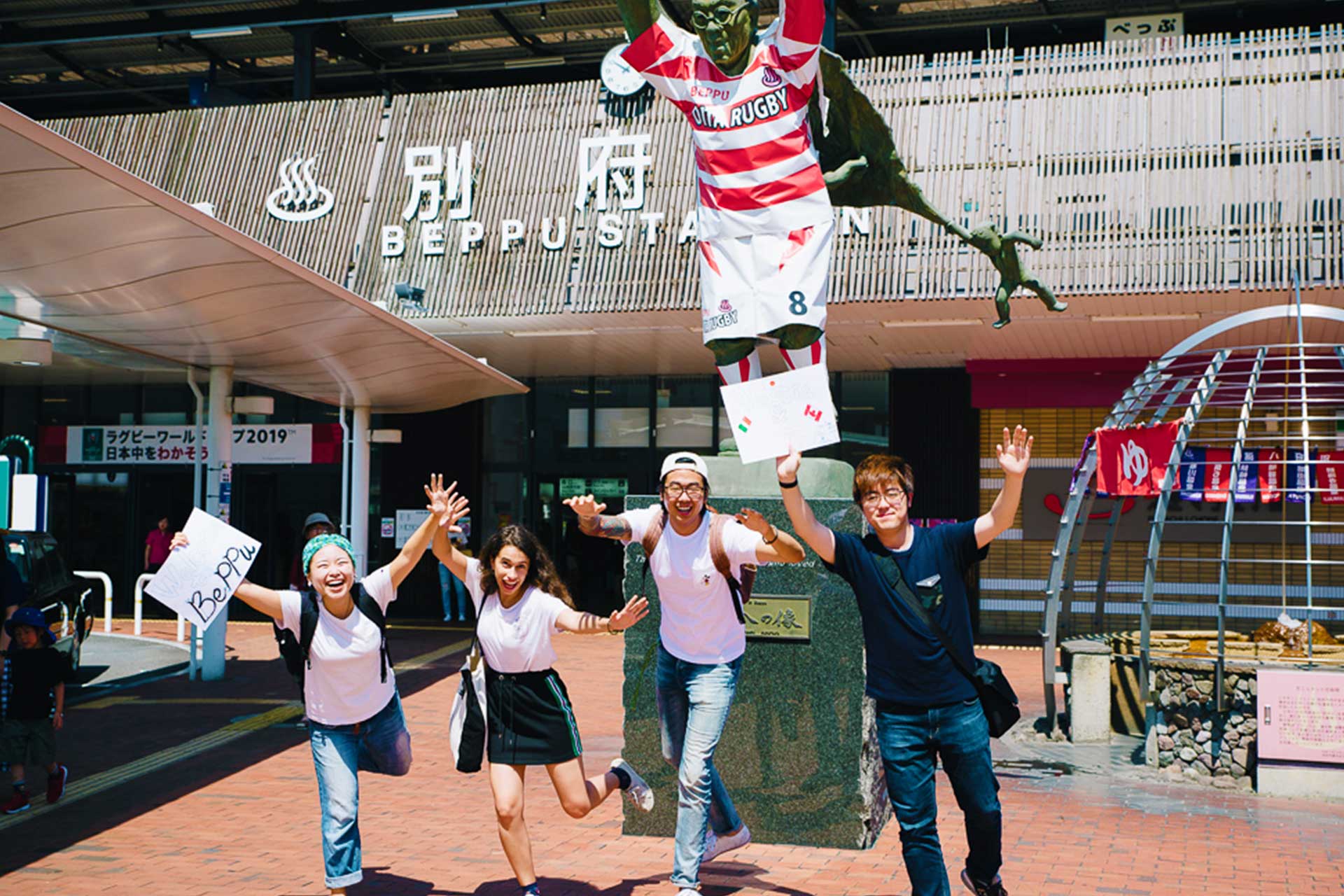 This time, I actually got to interview the bronze statue myself!

Kazu: Hello! First, what is your name?

Kumahachi: It’s nice to meet you too.

Kazu: What kind of lifestyle have you lived in Beppu?

Kumahachi: I did various things while in Beppu.
When I was 49, I moved to Beppu and started sightseeing bus tours with Kamenoi Ryokan and Japan’s first female bus guide. In addition, I also proposed the “Beppu Hells Tour.” 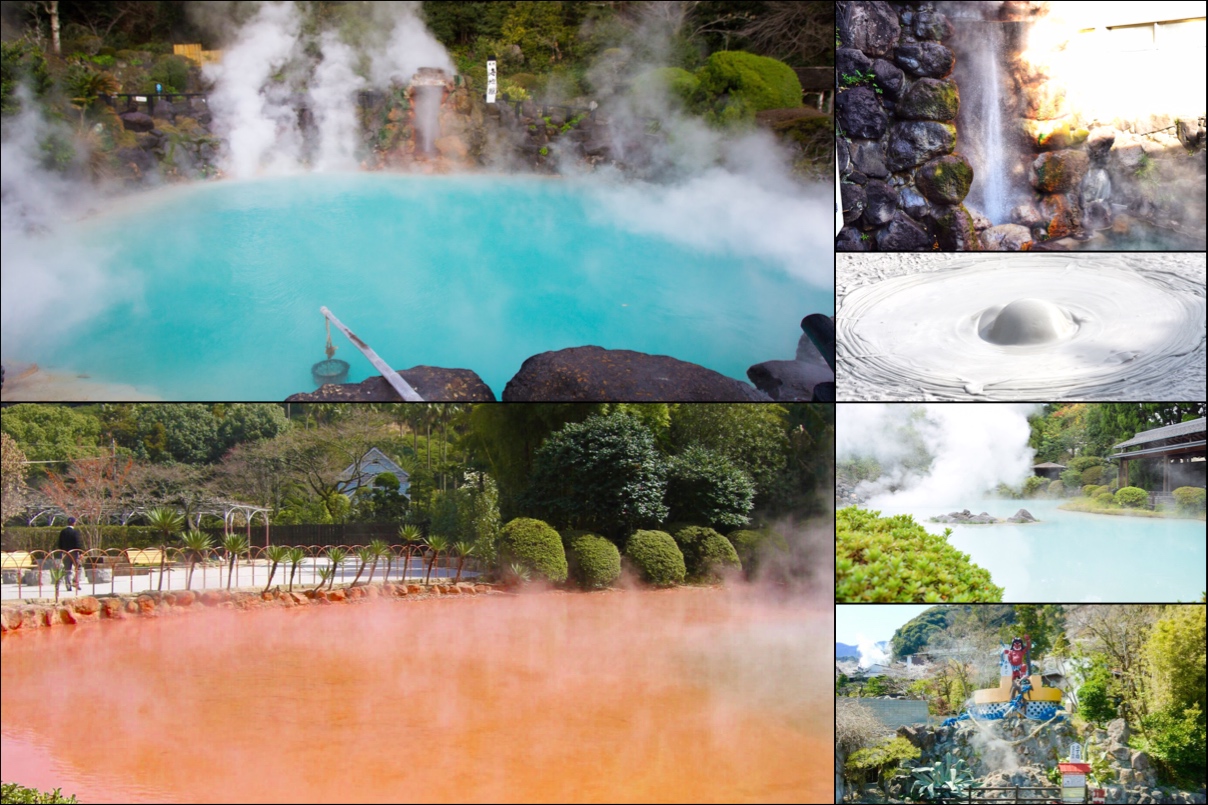 Kazu: Oh wow! so you were the one who thought of the famous “Beppu Hells Tour!” You must have been an amazing person!

Kumahachi: No no, I did everything for the tourists who come…

Kazu: (Wow, what a humble person…) What did you do before coming to Beppu?

Kumahachi: Before I came to Beppu, I was in America. While I wandered, I ended up learning Christianity from a Japanese-American in San Francisco and was baptized. Thanks to my experience there, I began to think that I would like to treat and help travelers, rather than making money. After returning to Japan, I moved to Beppu to enliven Beppu’s tourism industry. 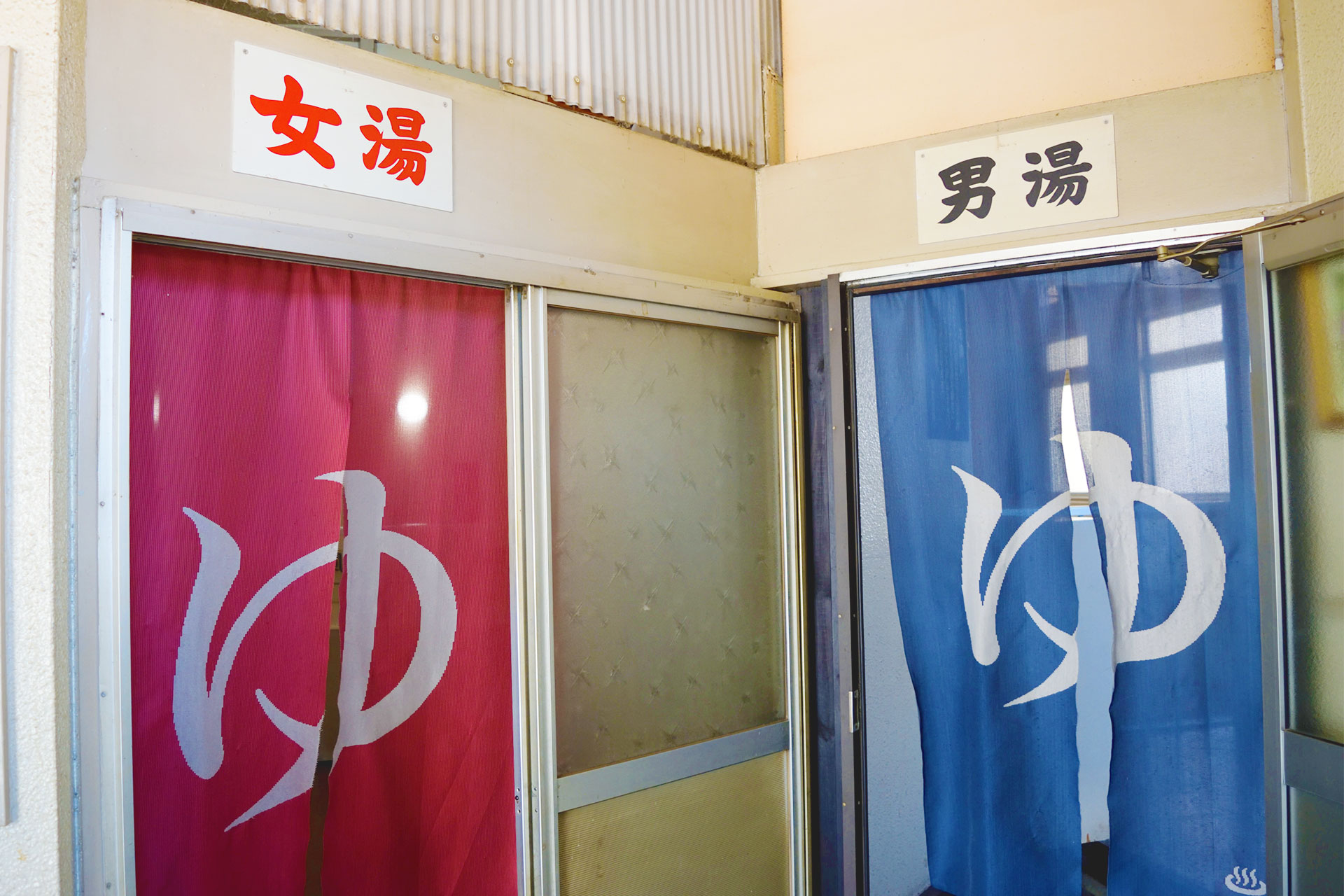 Kazu: I see, so you have been practicing “Omotenashi,” or Japanese hospitality, since that time!

Kumahachi: At that time, we would say “Don’t forget to show hospitality to strangers,” meaning to show them an experience that they could not forget. Specifically, at the Kamenoi Ryokan, nurses are always placed so that customers can respond to sudden illnesses, and therefore the ryokan can be a place to rest their body. At that time, it was also rare to offer sake.

Kazu: Is that so?? That’s amazing… What else have you done to promote hospitality and tourism in Beppu?
Kumahachi: I climbed Mount Fuji.

Kazu: Wow, you climbed Mount Fuji?! Not to be rude, but what does that have to do with hospitality in Beppu?

Kumahachi: I placed a wooden sign with the words “The Mountain is Fuji, the sea is the Seto Inland Sea, and hot water is Beppu. The best of Japan: Mt. Fuji, Seto Inland Sea, and Beppu Hot Springs,” at the 7th position of Mt. Fuji. In addition, I made a poster for sightseeing spots in the whole country where people gather and carried out the PR of Beppu in various places. 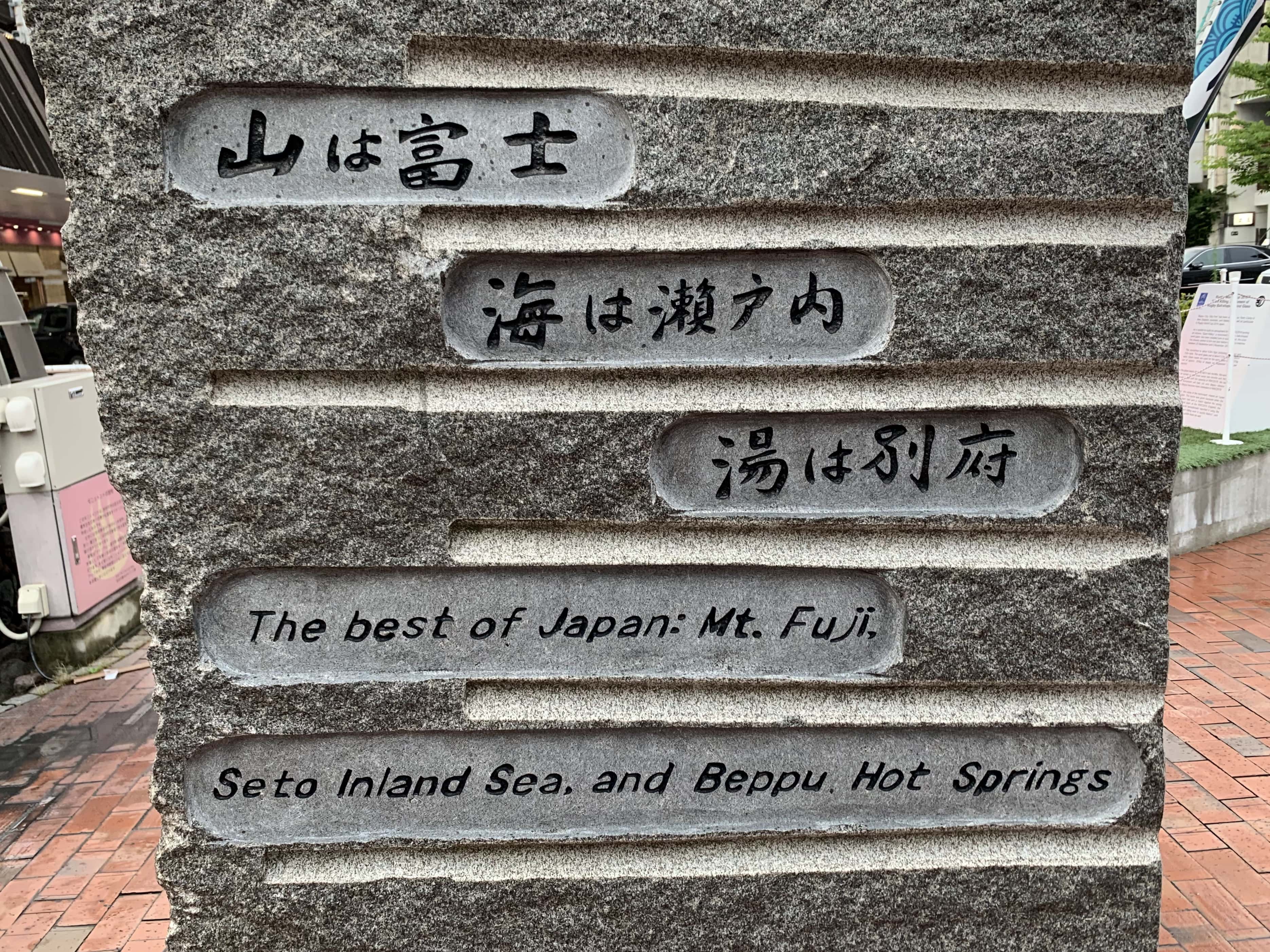 Kazu: What a great idea! Now, could you please tell us about your statue? How long has it been there? I was also wondering what the meaning of the pose is.

Kumahachi: This statue is from 2007. When deciding on the pose, they wanted something fun and lighthearted to represent the ideas I came up with for Beppu, not just standing upright. However, because I am standing on one foot it makes me unbalanced, and that represents some of the worries people had about the changes in Beppu.

Kazu: I see, it’s incredible how many meanings just one pose can have!

Kumahachi: Yes! Also, as I mentioned earlier, I was baptized as a Christian in America, so there is also a cross on my tie.

Kazu: Ah, I see it! Thank you so much for talking with me today. I will do my best to continue your work and make Beppu enjoyable to people all over the world! 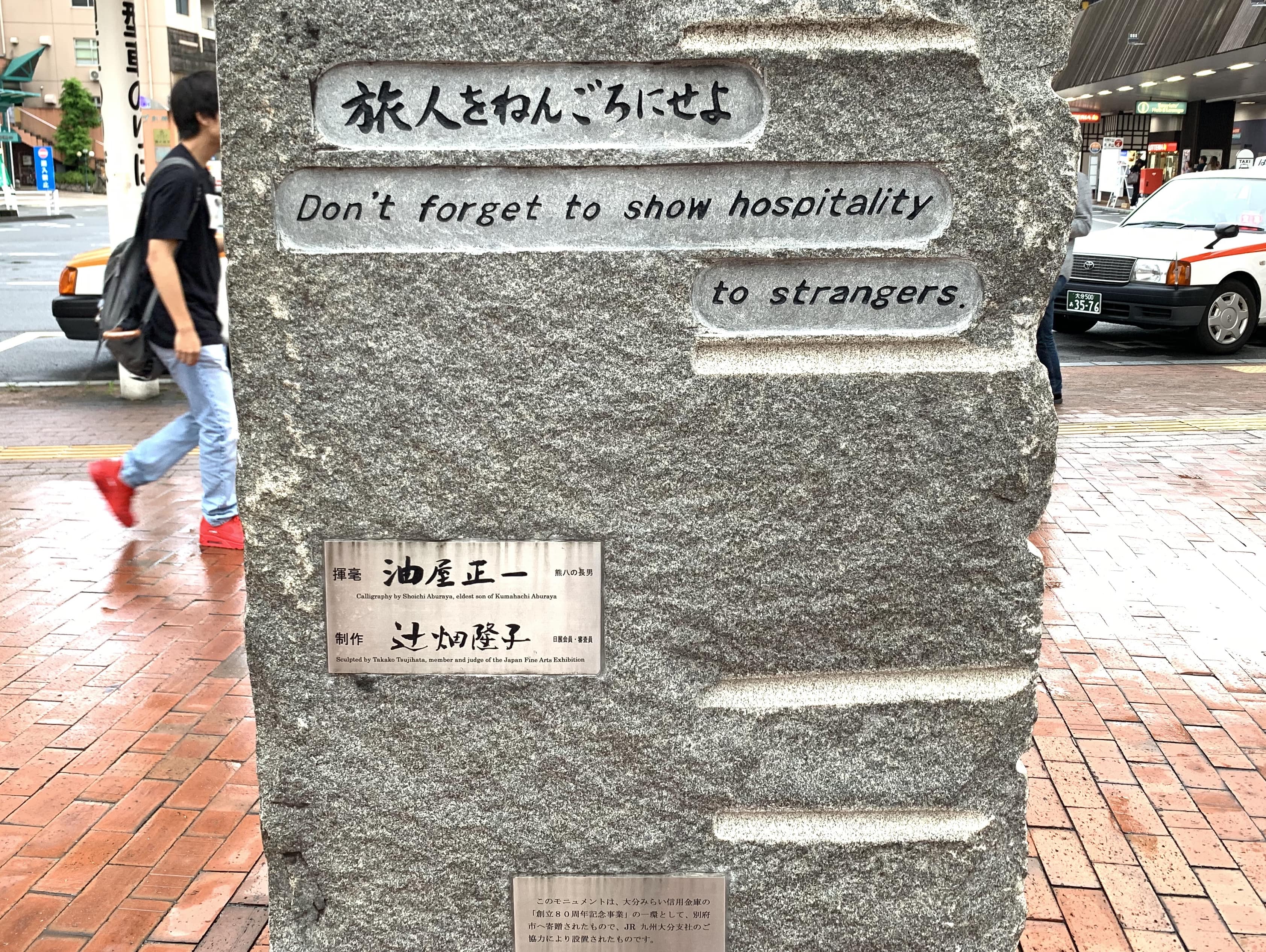 So how was the interview??
Kumahachi was a great man who helped to shape the history of Beppu!
I hope you enjoyed his talk! The statue in front of Beppu Station is packed with history!

Kumahachi was a great person who was devoted to sightseeing in Beppu. He was also an excellent businessman and a person with a sense of hospitality that was able to appeal to foreigners as well.

When you come to Beppu, be sure to take a picture with his statue!