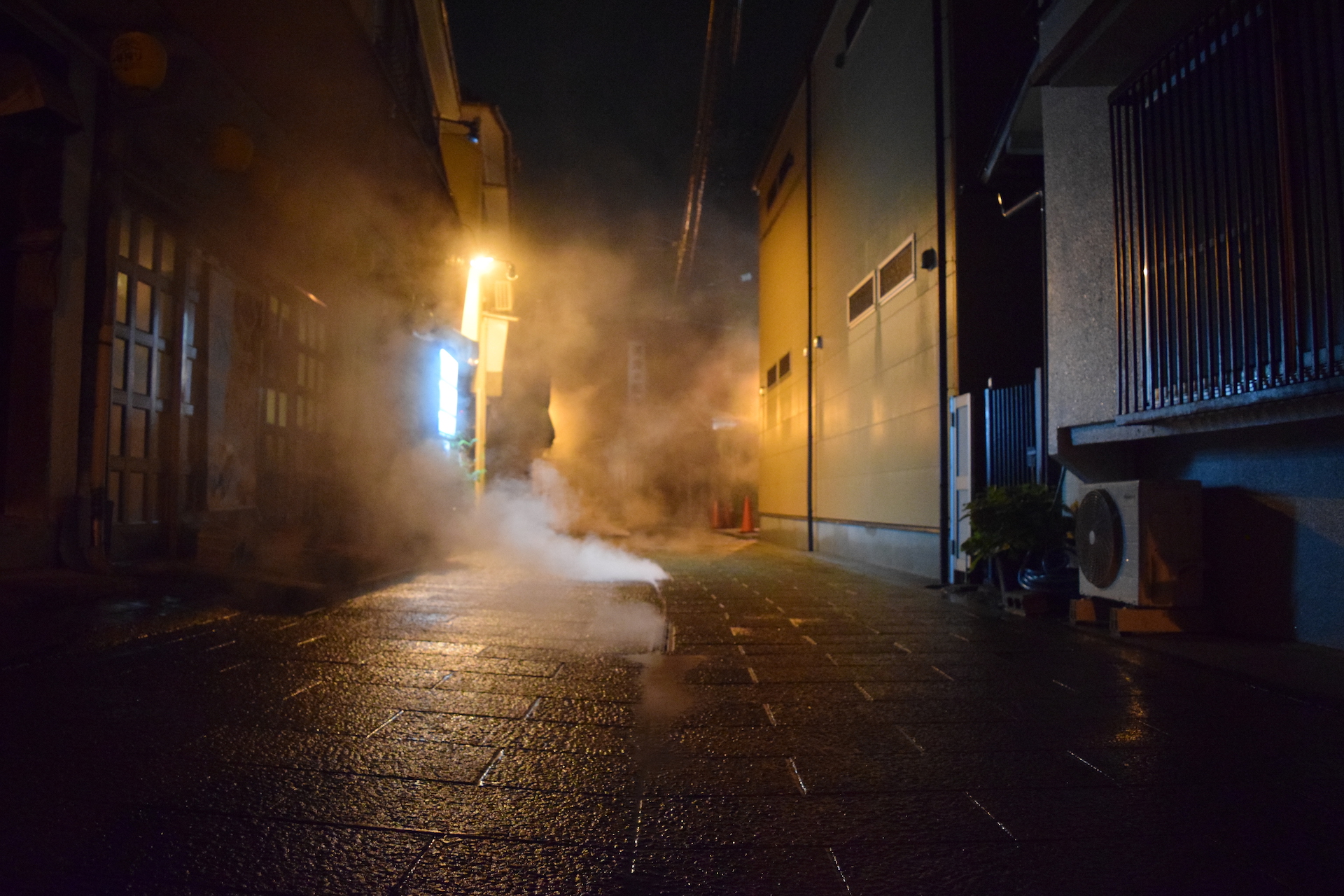 If you’re visiting Beppu, or if you’ve ever visited Beppu, you most likely know of the “Kannawa” area where the hells are located. It’s a tourist destination that can be called iconic in Beppu because steam rises everywhere you look, and it’s overflowing with Hell Tour tourists.
But do you know anything about what Kannawa is like at night?
In the quiet of night, Kannawa lures tourists in as the hissing sound of steam billowing skyward resounds.

If you are staying in Beppu on October 20th, there is good news. A bus that’s cheaper than the usual one will be operating. Many people use this bus to go to “Hell at night.” For the sake of those more interested in this deep, mysterious nighttime Kannawa than in general hot springs, I’ll be introducing it in this article.

Going alone is good too, but for people like me, there’s apparently a guide for this in English, of course. Okay! Let’s have our guest guide lead the way today!!

We gather in front of Wander Compass, an information desk at the station intended for travelers, and the bus departs at 7. 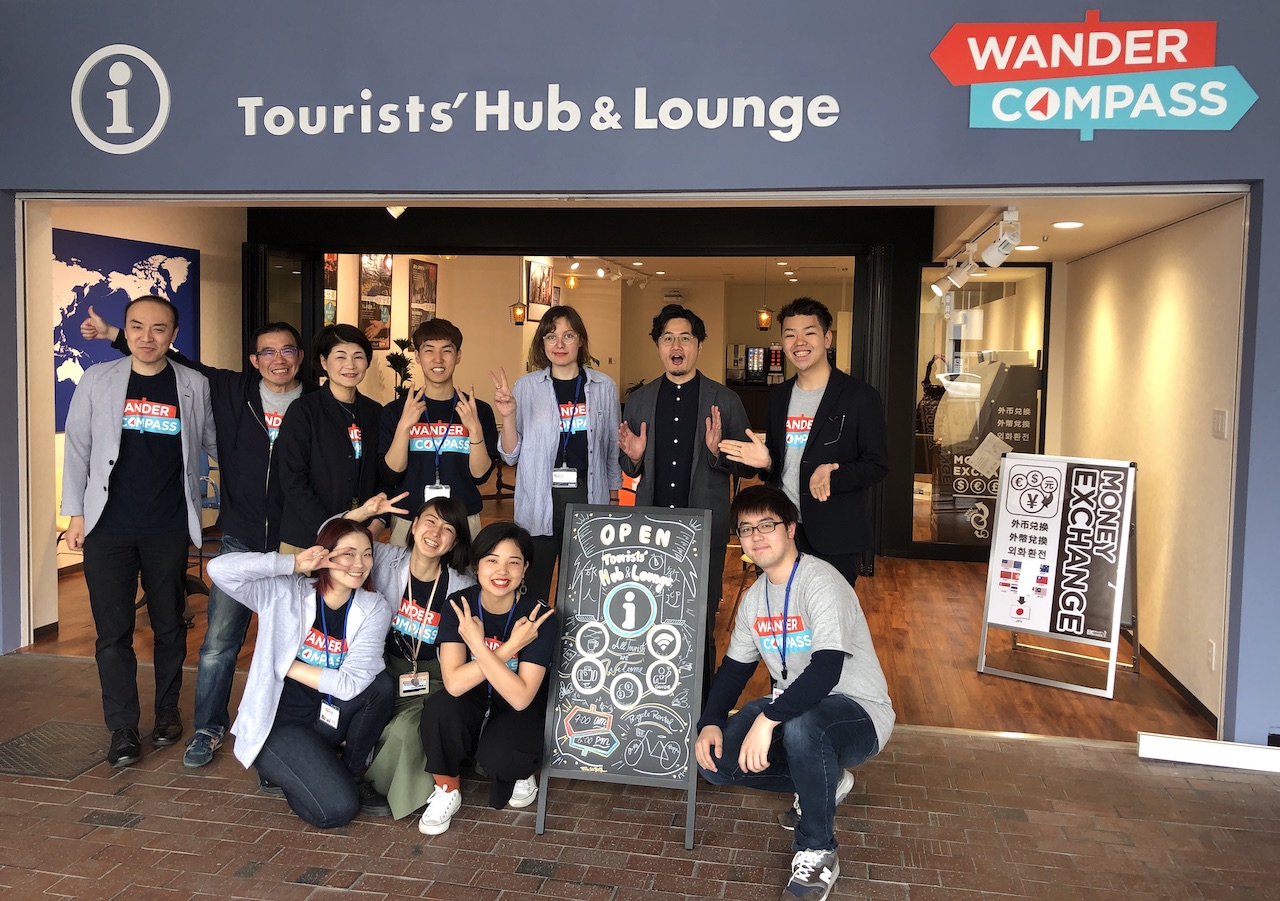 There are several other participants aside from me. It’s also great meeting new people there. Today, the female staff member here will act as our guide. After no more than 25 minutes, the bus arrives at Kamado Jigoku’s parking lot in Kannawa. Some people who have already toured the hell at night also joined.

The first place we visited is “Insenjou.” It’s a place where you can drink the hot spring water. What kind of taste could it have? The woman from the Philippines seems to like it. On the other hand, there are some whose faces are unreadable. 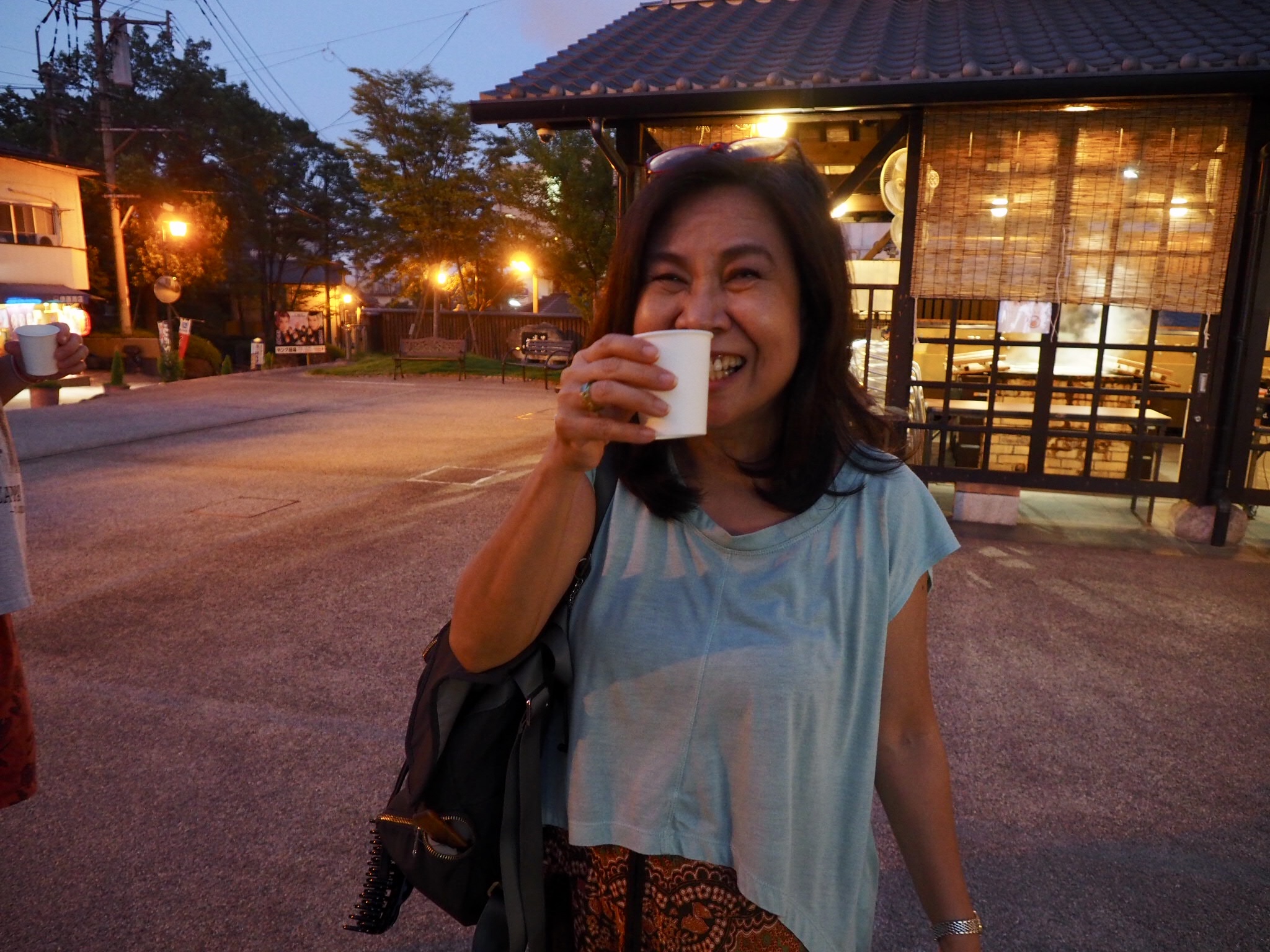 Kannawa Onsen has a lot of hot springs called “chloride springs,” which contain a lot of salt content. Thus, the hot spring here is also a bit salty. I like it quite a bit. Why don’t you try it out too? (As of August 21, unfortunately, the drinking fountain is out of order. I hope it will be fixed soon.)

There are very few people roaming Kannawa at night and it’s calm.
The city is enveloped in an orange glow coming from the street lights, and the atmosphere is nice. 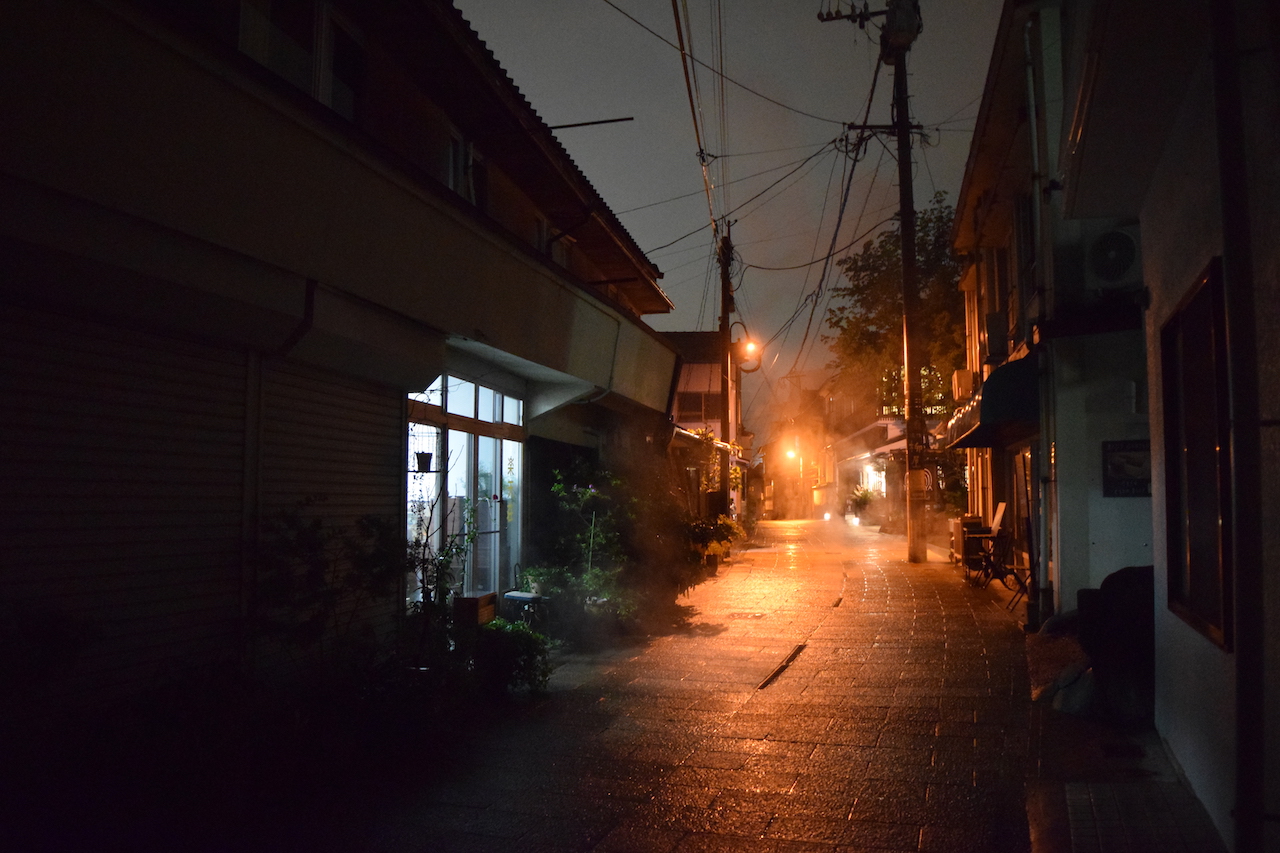 Next up is the communal bath used by the locals, “Netsu no Yu.” 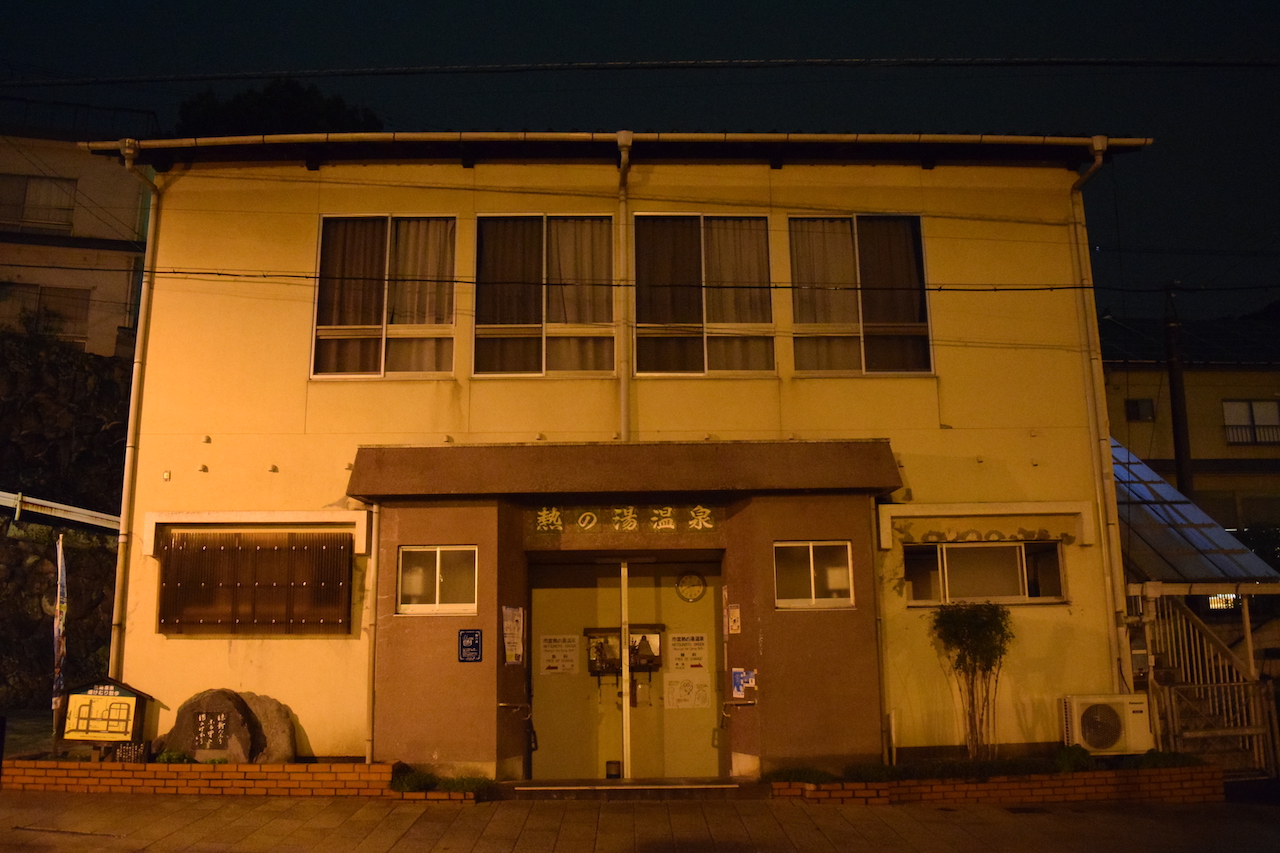 There were other hot springs while we were walking, so why this one? One reason is that it’s open until nighttime. And it’s free!! Even though it’s night, it’s hot and humid in Japan. If you walk and sweat, you can wash all that away before returning home here. It’s wonderful!

We get back to walking after a bit of washing the sweat away. 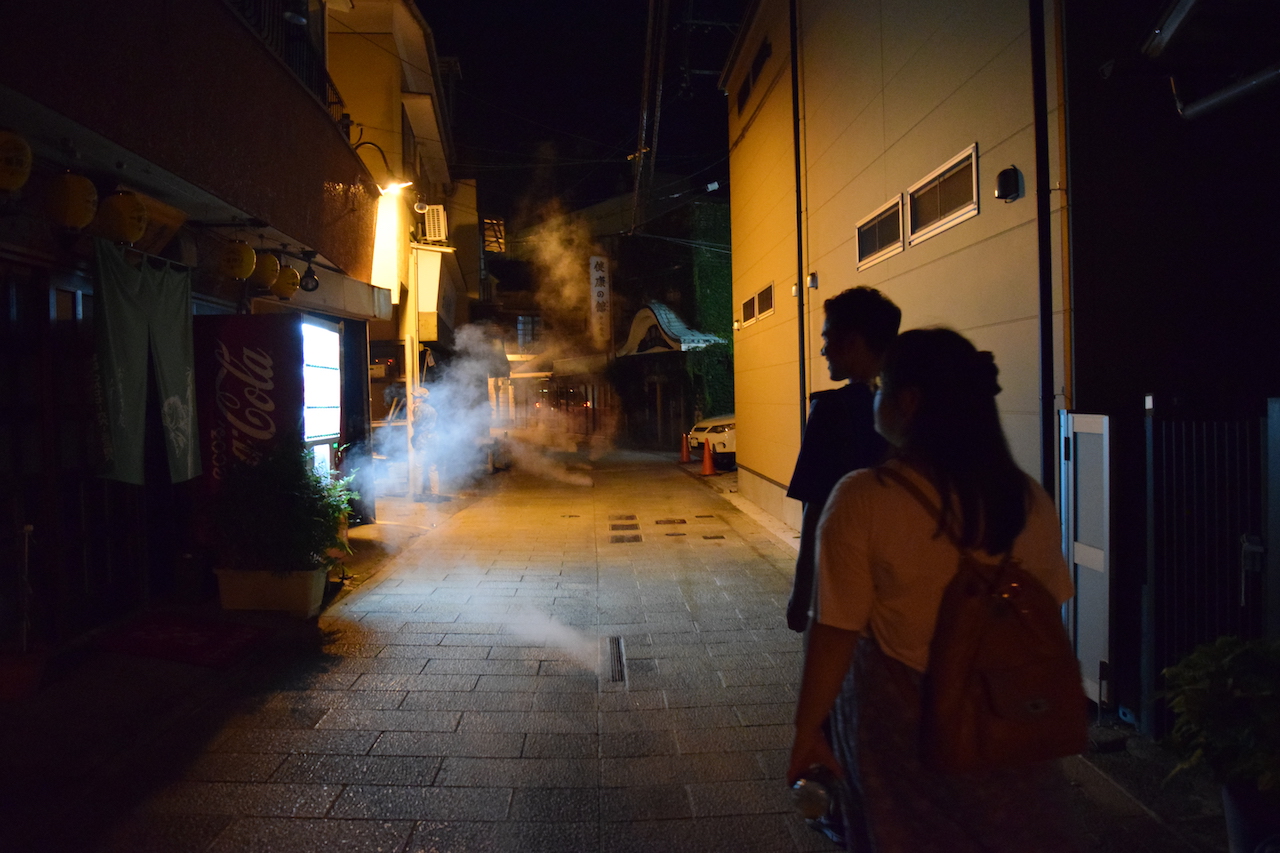 Pushing your way through plumes of steam rising from the ground is fun! It almost feels like you’re lost in a completely different world – another dimension. 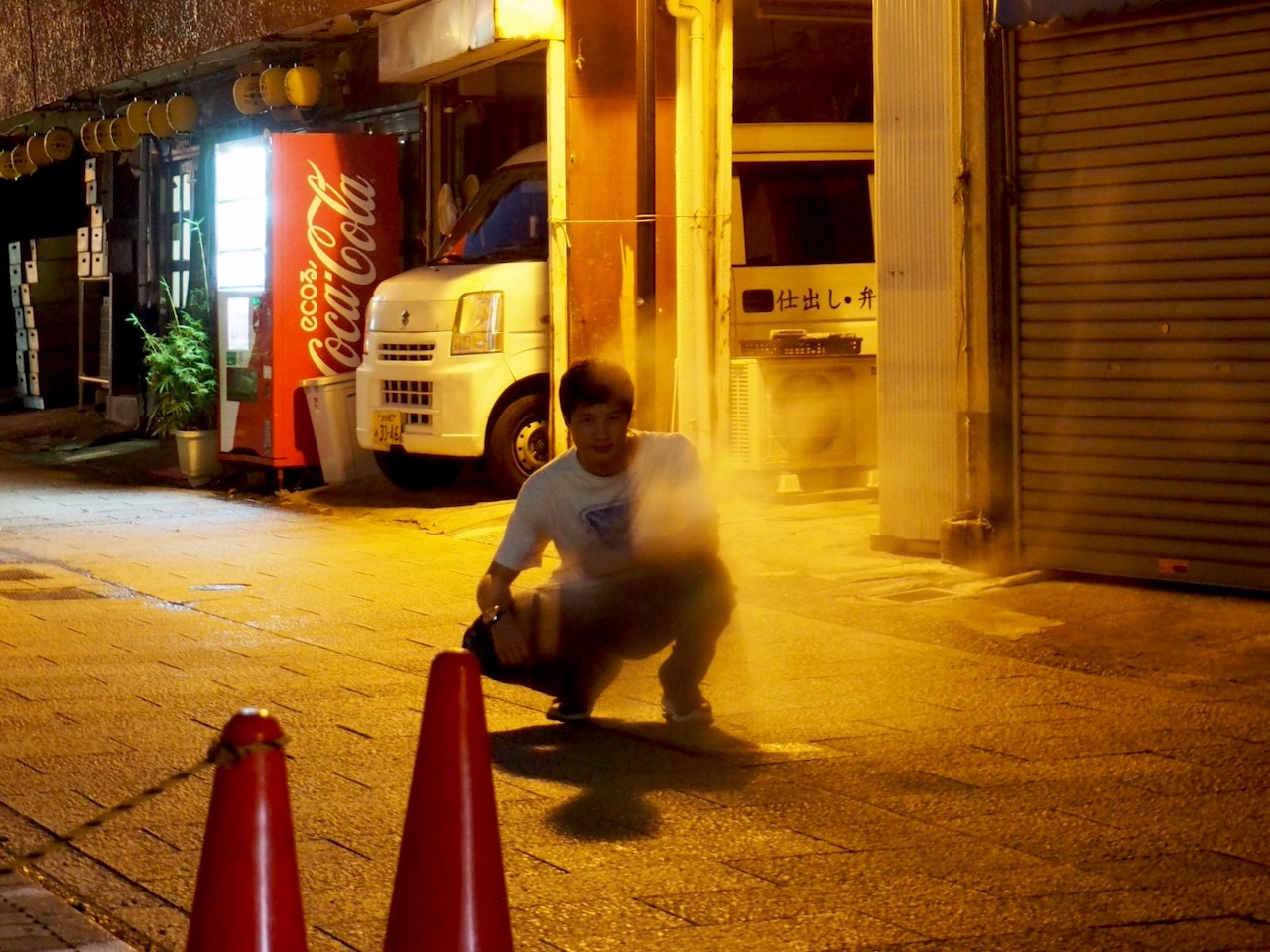 You can pretend to be anything you want.

Playing in the steam like this, huge clouds of them rise before your very eyes!!! 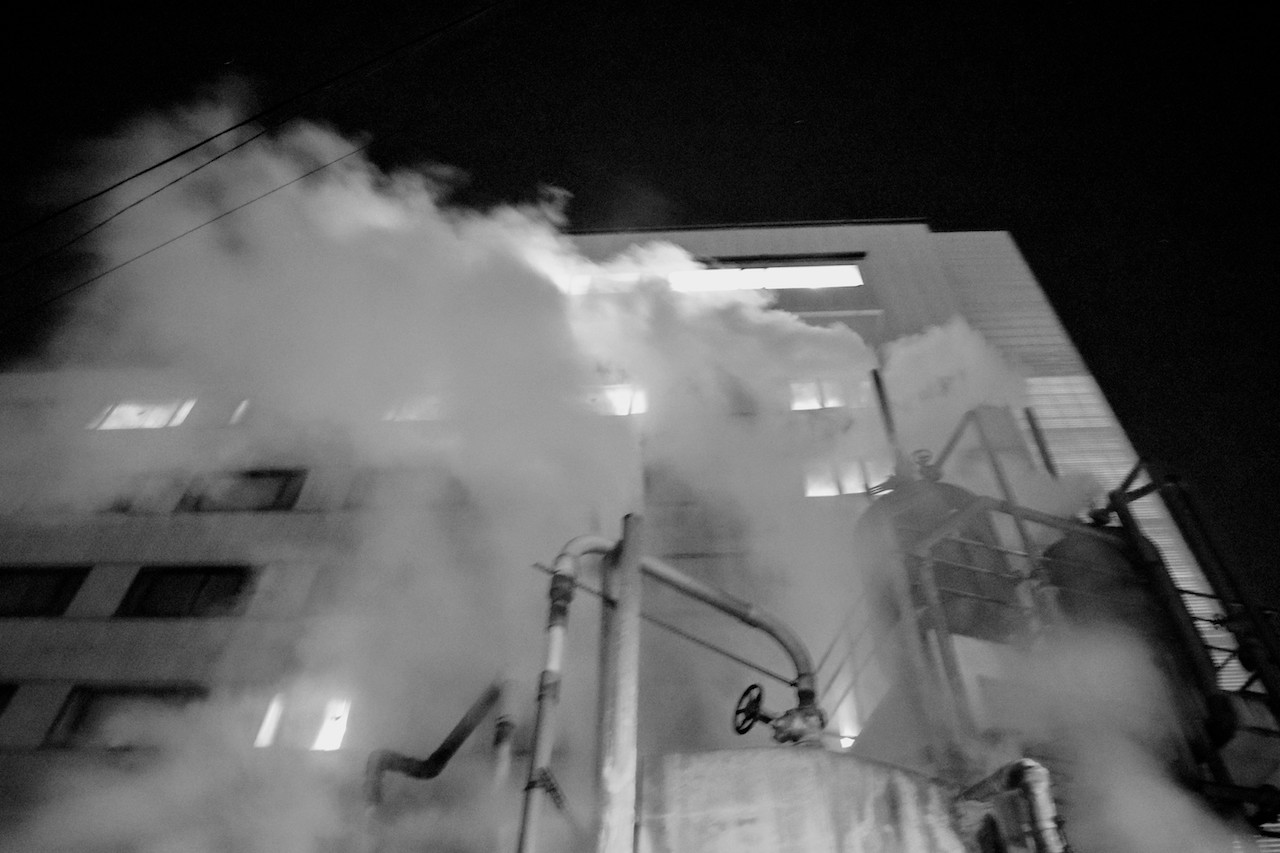 The guide calls this the “onsen monster.”
It seems to be a hot spring storage tank for a hotel. With whooshing and rumbling sounds and the hot spring’s crystallization that appears, its exterior is gnarled. Against the pitch black sky, the form the vapors take up as they rise truly make it monstrous. 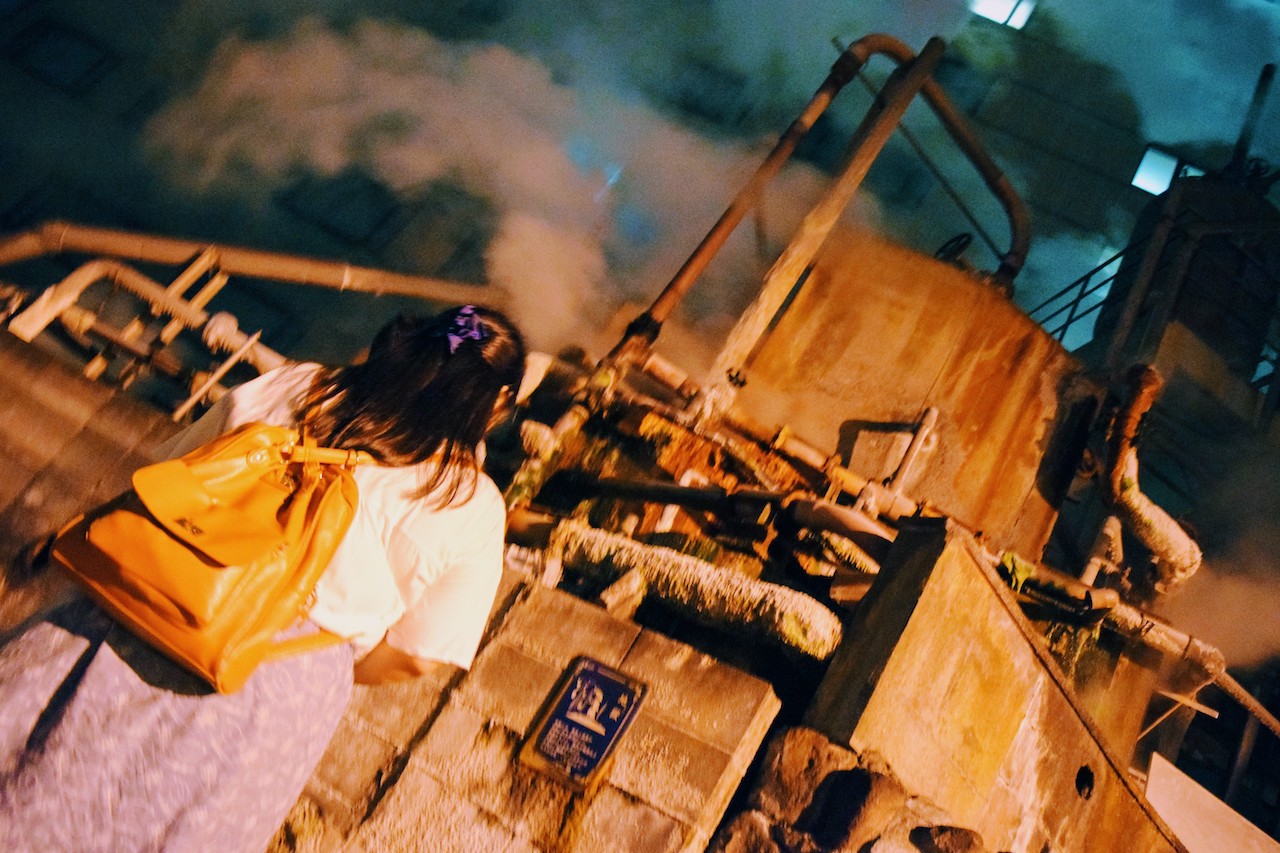 Steam also rises from the river on the other side. That’s because onsen is flowing through it.
The participants seem to be having fun taking pictures. It’s a full 360º view of hot springs. It can’t be denied that this is a Kannawa photo hot spot, but aside from us, there are no other tourists. The reason is because this is a hidden, back alley spot! 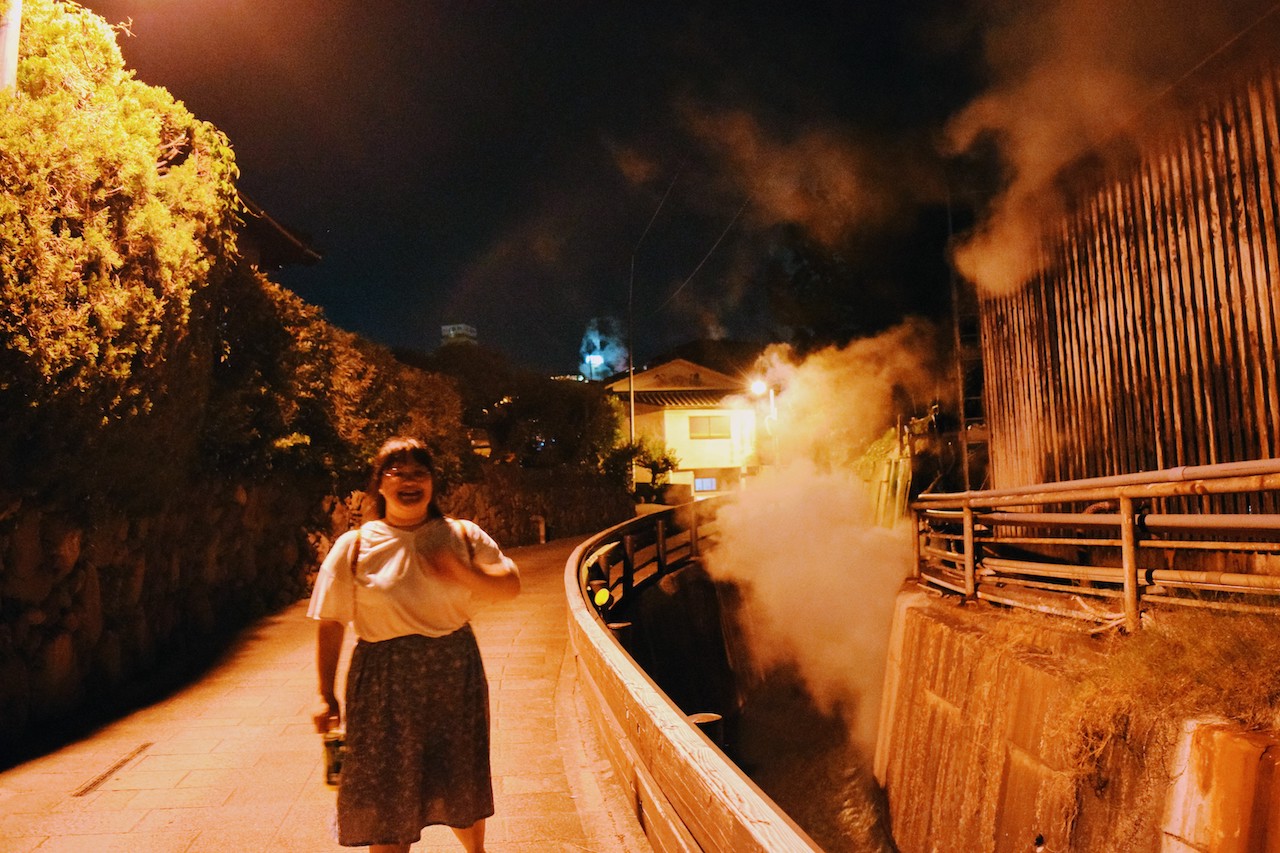 If you listen very carefully, you can hear the whooshing and splashing sounds of water trickling from the river on the opposite side.
When I went about approaching the guide, the hot springs dripped from a huge, bamboo-broom-like installation. As expected, steam rose from there as well.
At night, the glow of the street lights and the vapors that cover the area make for a mysterious atmosphere. If you look at it at noon, you can see the drops of water dripping from the bamboo clearly. 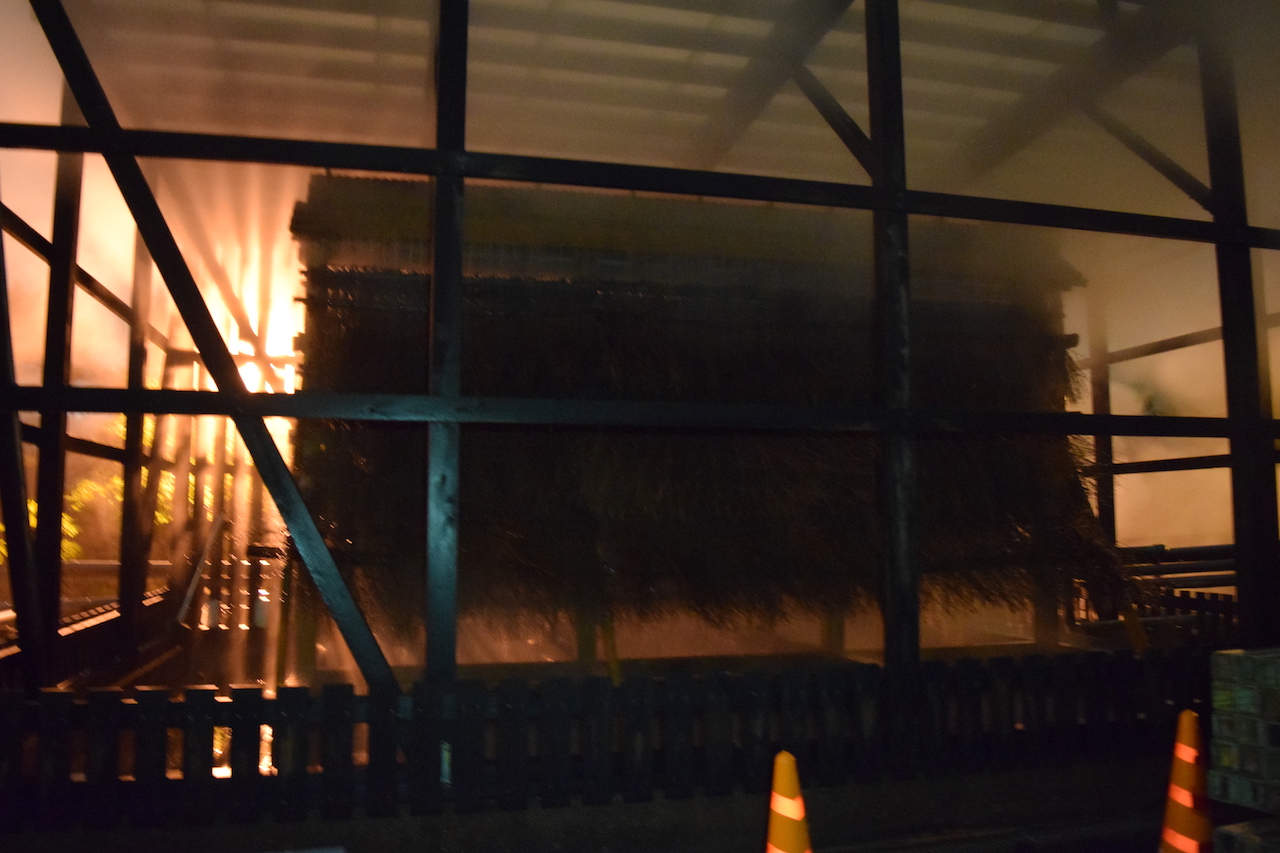 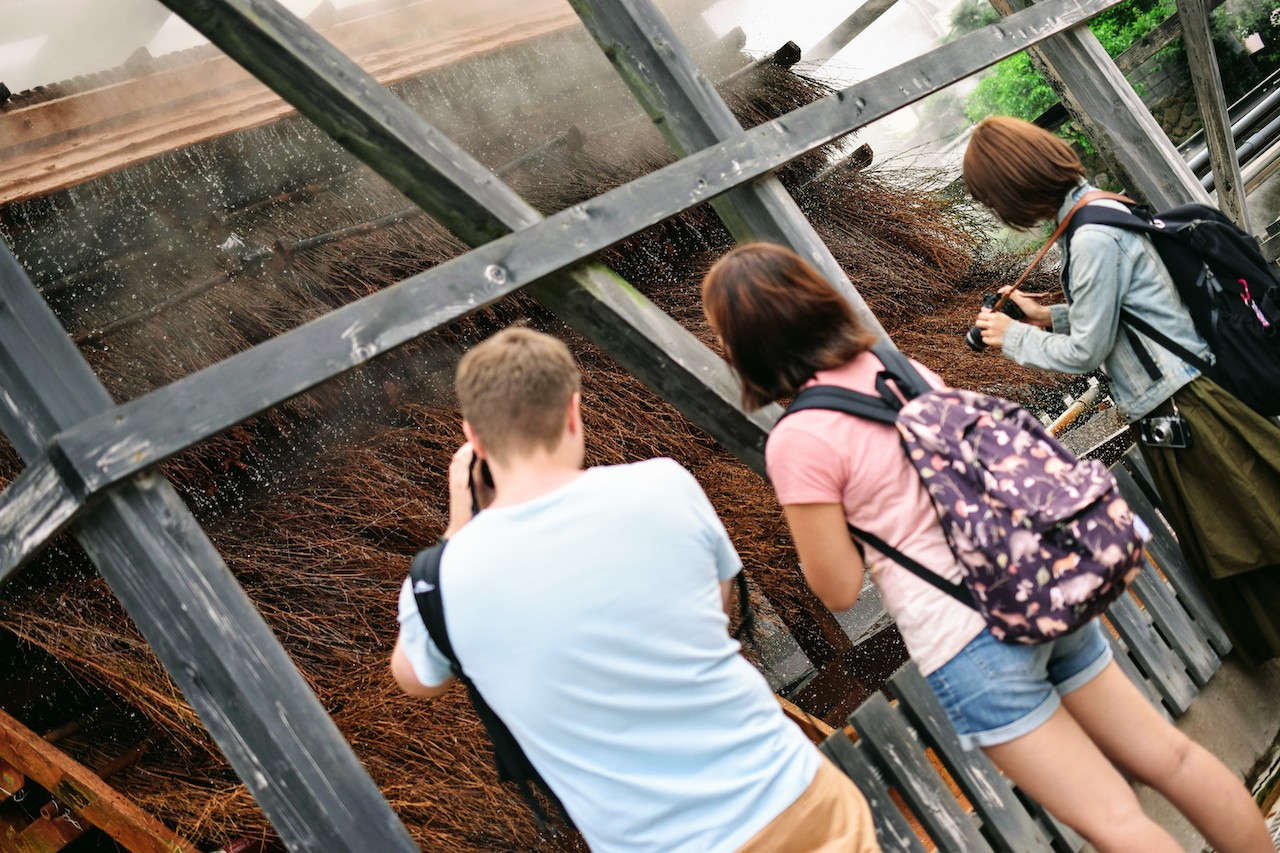 Ms. Guide! What is this!?
She responds that she believes it’s a hot spring cooler, but in the end it’s still uncertain. If you ask for a little more explanation, it seems that the hot spring, which is close to 100°, is thus reduced by connecting it to a lot of bamboo branches. That allows the outside air to reach it, and the temperature of the hot spring is lowered.
I see!
And by doing so, it is said that it is possible to lower the temperature without thinning the natural hot spring ingredients with tap water.
“The person who came up with this is a genius!” exclaimed a young man from China. He’s not wrong. I think so as well! 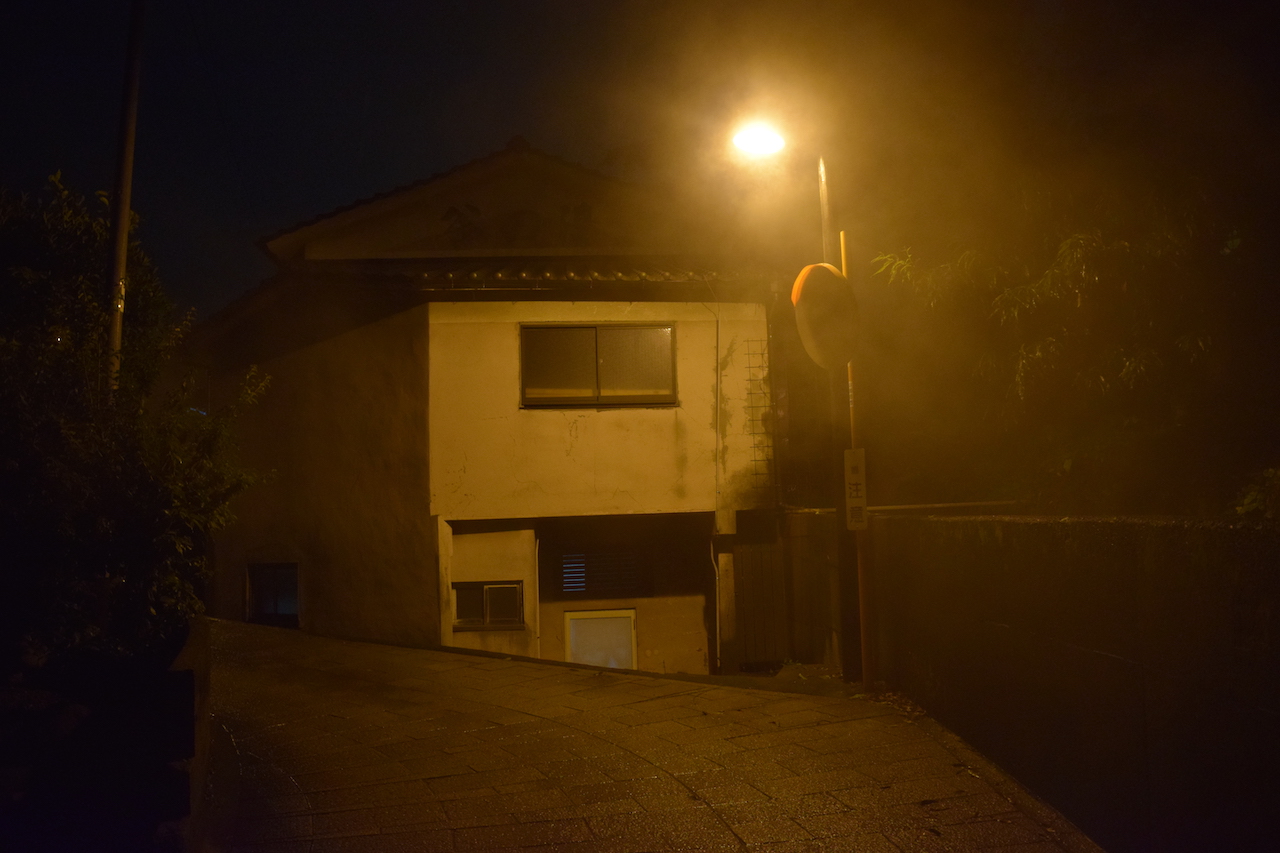 However, if you turn to the left of the building, you will find a cobblestone staircase leading down into a basement. And there are doors one by one from side to side. 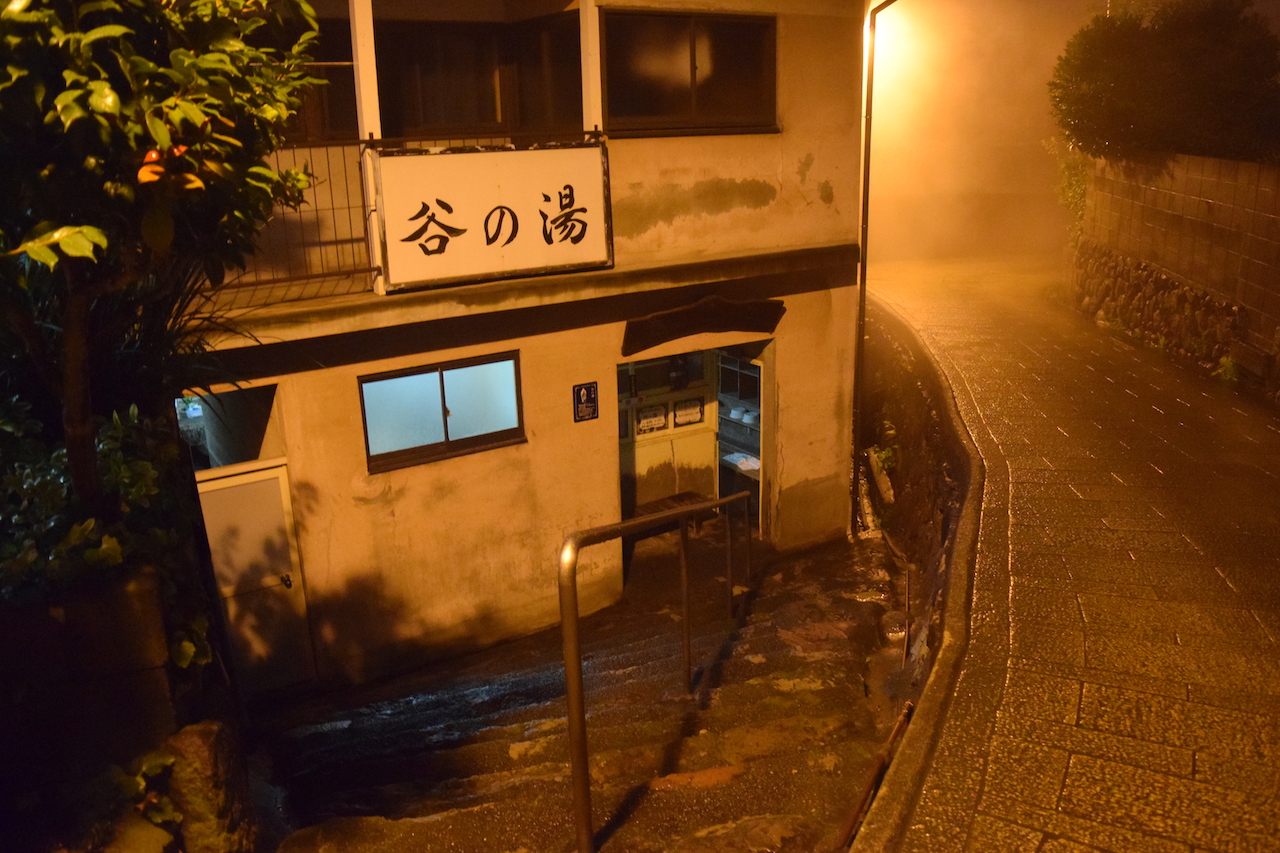 In addition, the pipe that’s totally out of place juts out from the window of the living room where an old woman, who seems to be the place’s resident, is relaxing. I guess this is where you’d insert your entrance fee of 150 yen. 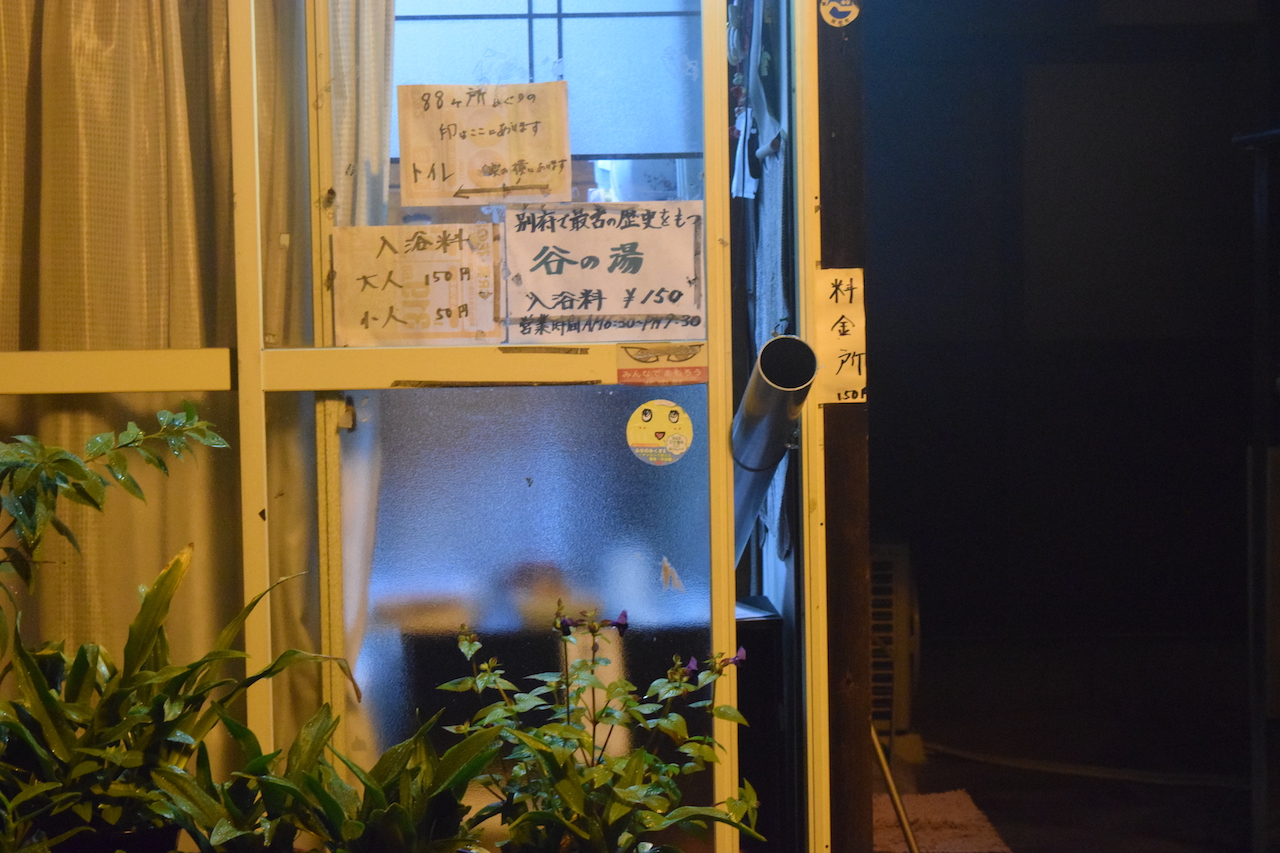 Inside was the statue of Niou. 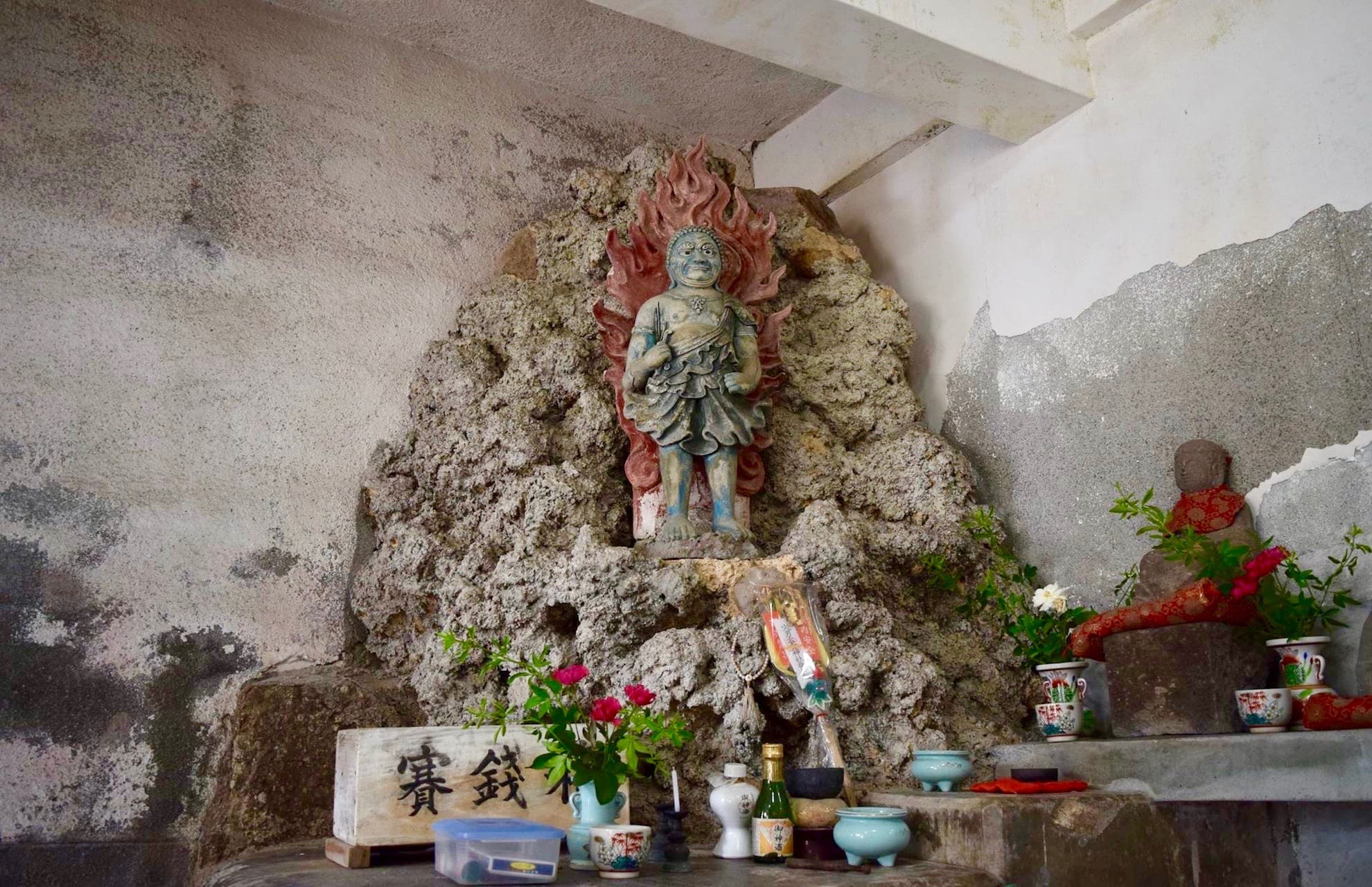 I feel that, for the region, hot springs are a part of culture and tradition. 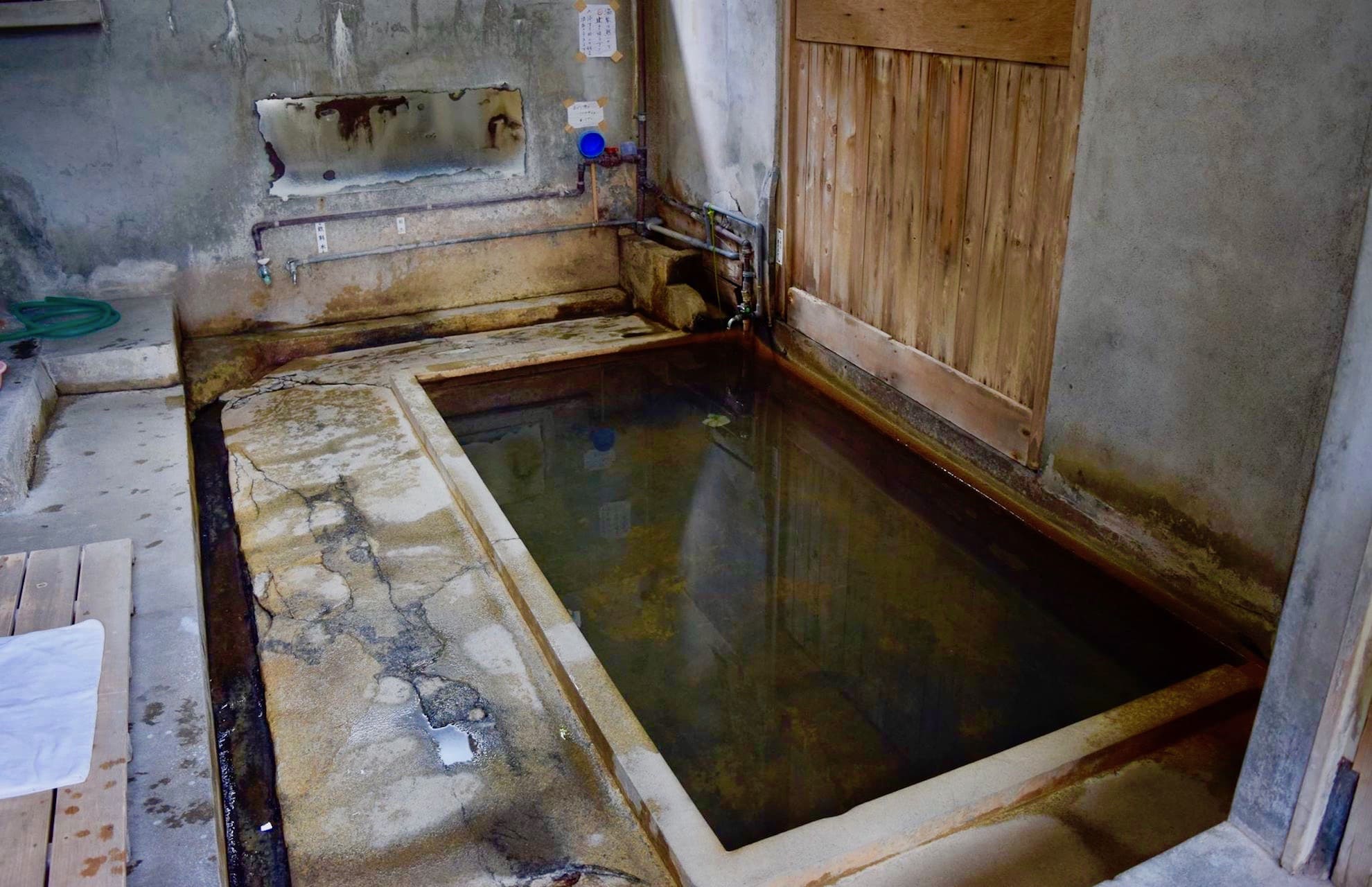 In Kannawa, there are many old, yet splendid buildings. This place, which has flourished as a hot spring health resort since long ago, is where many traditional ryokan and and hot spring inns remain.

“In the past, geisha would wave from the window (veranda), to beckon customers,” is a snippet of info from the guide, inviting us to imagine the brilliant imagery of that time. I’m sure it’s casual scenery if you’re walking alone, but if you follow the locals, you’ll notice that there are a lot of stories lurking in the “normal scenery.” Yeah, it’s great that you came along. 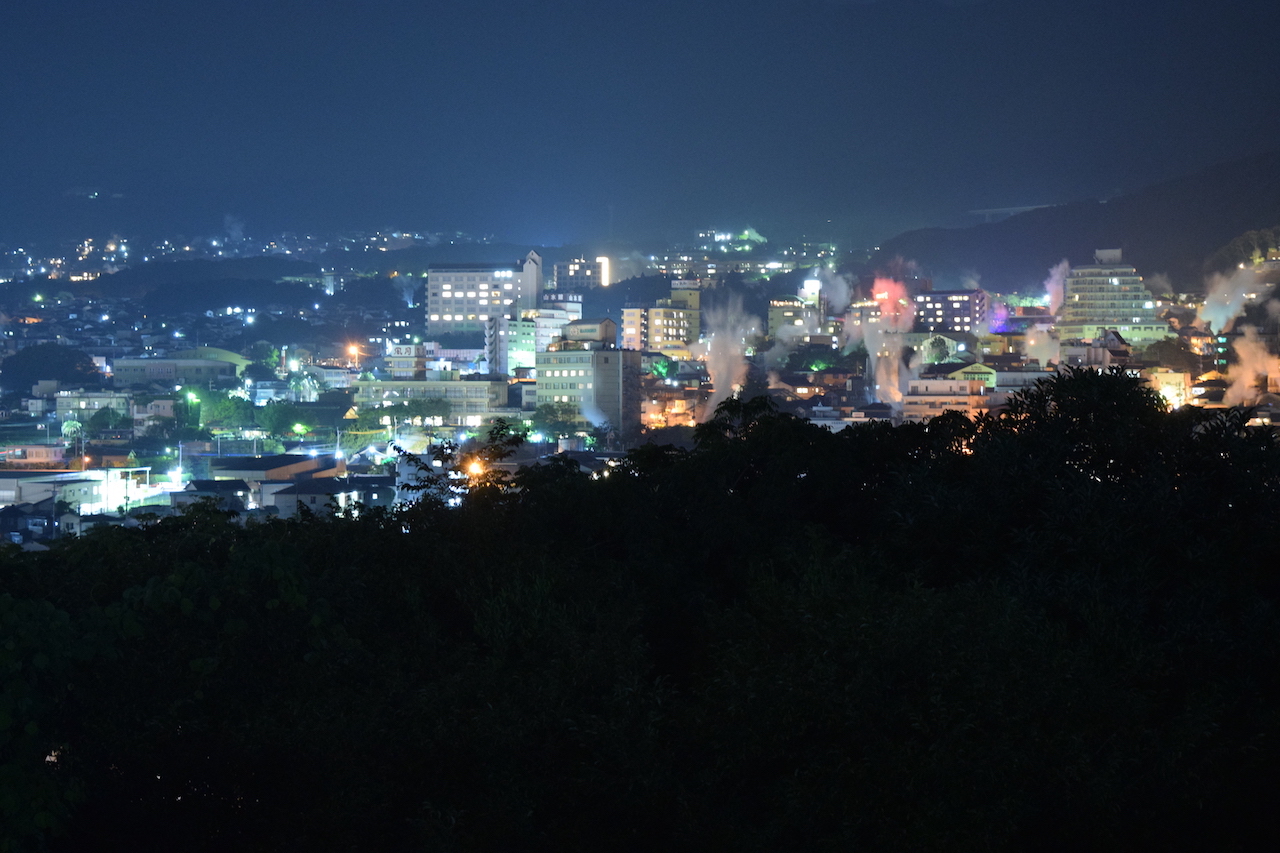 Just like that, 2 hours pass in the blink of an eye.
We were able to come by the limited time only shuttle bus, but the normal, scheduled bus is fine too. You can leave on the [5] bus until late at night from the west entrance of Beppu Station.

If you want to come earlier, or if you want to soak in a hot spring and then go home with a glass of beer, you can use the bus.
How does wandering through the steamy town of Kannawa, one of the onsen areas in Beppu, on a summer night sound?