Why Japanese Drink Milk After Onsen

Anyone who has been to onsen knows there are always vending machines waiting nearby. Of course, it’s easy to see why patrons would want to rehydrate after soaking in the steaming waters for a while. Perhaps less obvious, however, is why you may sometimes see conspicuous vending machines full of milk when you go to these hot springs. Or why you may see some anime characters drinking milk after onsen or a bath. Well, the answer lies not in onsen culture, but instead, in a long-standing bathhouse culture.

When it comes to Japanese bathing practices, along with “onsen,” you may also come across the word “sento.” Sento is a public bathhouse where the baths are filled with heated tap water. Though also an important part of Japanese culture, sento differs from onsen in many significant ways. (To find out the difference between sento and onsen click here.)

You can find sento (銭湯) all over Japan. The Chinese character “銭” stands for outdated currency that amounted to 1/100th of 1 yen. And you may often come across the kanji “湯,” meaning hot water, in both onsen and sento. Together, the Chinese characters indicate a paid bath. It was in the late Taisho Era (1912-1926) that what are now as sento were built and throughout the post-war period these public baths were quite popular.

But why do the Japanese drink milk after bathing?

The tradition of selling milk in these bathhouses began not with milk, but another product called “coffee milk.” In the 1920’s, Ken Moriyama, founder of the Moriyama Dairy Company, met Tajiro Sumida, first president of Sumida Shokai, while Sumida was trying to sell coffee beans. To expand the commercialization of both milk and coffee in Japan, the two created “coffee milk” a mixture of both beverages with a little bit of sugar, and soon, the product began to spread throughout Japan. By 1943, coffee milk was undeniably one of the most popular drinks in the country. 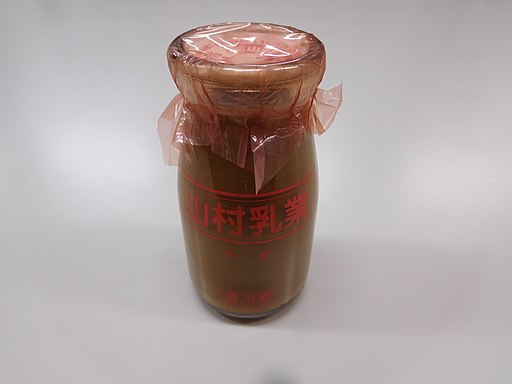 However, as Campus Magazine describes the legend, it was not Moriyama Dairy, but another milk producer’s decision to release coffee milk in 1955 that was responsible for the drink’s appearance in sento. It just so happened that this product launch coincided with the largest rise in number of sento in history.

The maker, wanting to expand the product’s reach, understood that refrigerators were still scarce in Japanese households, but abundant at sento. The facilities would place these refrigerators in the rest areas or changing areas, where guests gathered to chat while drinking cold beverages. The milk producer approached sento owners with the idea of selling coffee milk, and soon, it was being stocked in sento refrigerators everywhere.

Throughout this era and until the 70’s, many Japanese households would remain without their own baths and refrigerators were even rarer. So, sento was a place where Japanese could enjoy both these luxuries at the same time.

A Little Taste Of Luxury

Milk had already been established in Japan as a rich source of nutrients. And now that it was available at sento, it became the perfect way to rehydrate and replenish the body after bathing. The added coffee allowed people to have a small taste of luxury in their daily lives; coffee was still expensive, but coffee milk was about the same price as entrance to the sento. Not to mention that after exiting the hot bath, the refreshing chill of the sweet drink became even more delicious.

Now, drinking milk after visiting sento, taking a bath, or getting out of onsen is almost as if written into the Japanese DNA. Milk and bathing are as inseparable as beer and edamame or wine and cheese. So next time you are wondering what you should do after onsen, consider drinking a cold glass of milk.

Our Favorite Ways to Enjoy Milk After Onsen

For your enjoyment, we listed some of the best ways to enjoy milk or coffee milk at a few of our favorite onsen.

After enjoying the outdoor pool, you can detox in the mixed sauna or head straight to the onsen. When you are done bathing, grab some coffee milk at the reception area’s vending machine and head upstairs to lounge on the tatami mats.

Here, you can enjoy a steam bath on a bed of Japanese herbs. After washing off your sweat in the normal onsen, you can grab some milk in the reception area and relax in the lounge area complete with massage chairs!

Enjoy an array of indoor and outdoor hot springs. The lounge area here is quite spacious, giving guests the perfect atmosphere for enjoying post-onsen beverages.

How to get to Beppu Onsen where you can enjoy onsen, milk and more!
If you click the “GET STARTED” button below, you can find amazing hot springs and more recommendations!